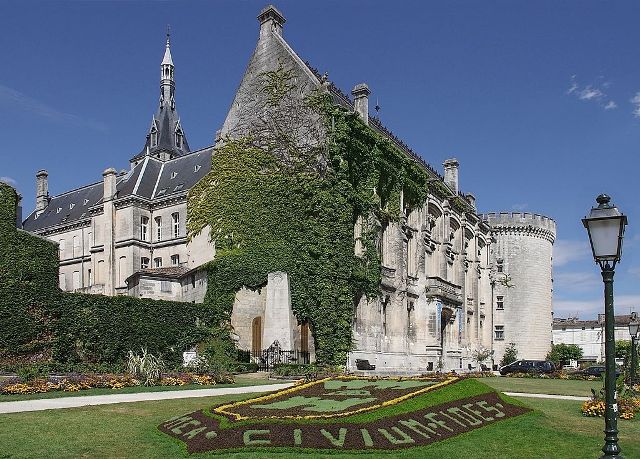 Location: Angoulême, in the Charente departement of France (Poitou-Charentes Region).
Built: 12th-19th century.
Condition: In good condition.
Ownership / Access: Ville d'Angoulême.
Notes: Hôtel de ville d'Angoulême is a public building constructed from 1858 to 1869 in the heart of the high-town of Angouleme. Designed by architect Paul Abadie in an eclectic style inspired largely medieval aesthetics and punctuated with a few references to the Renaissance and the Classicism, it stands on the site of the old count's castle, which he remains the keep of Lusignan (XIII century) and the tower of the Valois (XV century). The belfry, which overlooks the whole and emphasizes its monumental character, is largely subsequent to these two constructions (nineteenth century). The town hall is surrounded by cafes and restaurants and by inspired flowerbeds of French gardens. The nearby New York instead runs between City Hall and the walk of Desaix bulwark, a little further west. The dungeon, the gatehouse and the "new castle" are built in the twelfth century and the thirteenth century. In the fifteenth century adds a square flag stuck to the west of the tower Marguerite. This lodge has a polygonal tower containing the staircase. At the end of the fifteenth century are built fortifications star, of which only three watch towers, street Bélat, Wild Street and a third in a private garden of Austerlitz impasse, and a tower visible in Marengo space. The castle of the counts of Angoulême there remains only the keep of Lusignan and the tower of Valois. They were listed as historic monuments in 1929.

How To Get To Hôtel de ville d'Angoulême (Map):