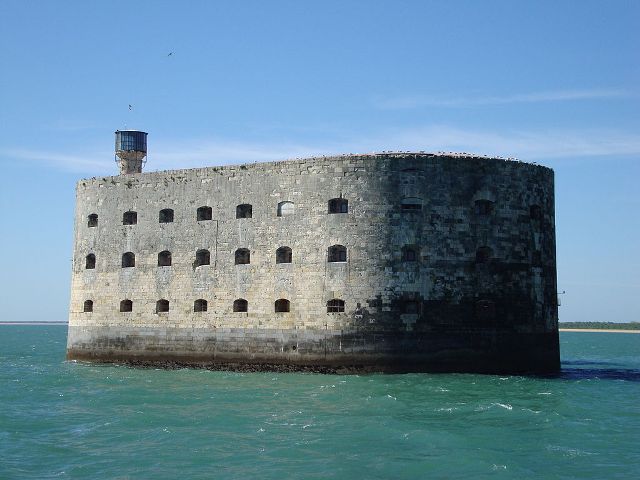 Location: Île-d'Aix, in the Charente-Maritime departement of France (Poitou-Charentes Region).
Built: 1804-1857.
Condition: In good condition.
Ownership / Access: County Council of Charente-Maritime.
Notes: Fort Boyard (pronunciation: / bwajaʁ / pronunciation of the title in its original version Listen - more rarely: / bɔjaʁ / pronunciation of the title in its original version Listen) is a fortification located on a shoal formed a sandbar in originally called "loin Boyard 'which discovers with low tide and is located in the Pertuis of Antioch between the island of Aix at Northeast, Oleron island in the southwest, the Isle madame southeast and the island of Ré in the north, belonging to the Charente archipelago, and attached to the cadastre of the municipality of the Isle d'Aix, in the department of Charente-Maritime. If building a defensive system on the "loin Boyard" is considered from the seventeenth century, the project materialized in the course of the nineteenth century. Built to protect the harbor, the mouth of the Charente, the port and especially the great arsenal of Rochefort assaults of the English navy, it is transformed into a prison a few years after its completion. The building is now mostly known for the game show of the same name, shot on location since 1990. Fort Boyard is part of Rochefort Maritime Arsenal extending throughout the estuary of the Charente. It is now a property of the County Council of Charente-Maritime. It is the subject of a registration as a historic monument since 1 February 1950.