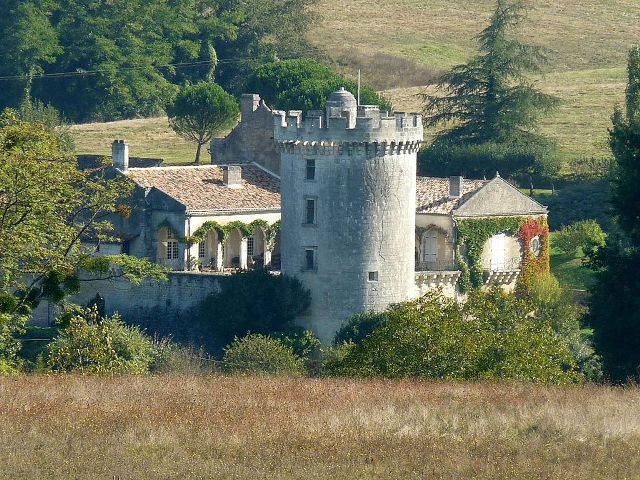 Location: Rougnac, in the Charente departement of France (Poitou-Charentes Region).
Built: 15th-19th century.
Condition: In good condition.
Ownership / Access: Privately owned.
ISMH Reference Number: PA16000006
Notes: Château du Repaire is located in the valley on the Manore Rougnac commune in the Charente. Access is by a dam that retains a pond. The present castle which replaced an original castle is attested belong to Helie Arnaud in 1238. The owners of this medieval castle whose construction began in the twelfth century are known since the reign of Louis IX. By marriages and legacies that will be Jean Birac in 1454, then Raymond, the Ranconnet the Galard who become lords of the Lair. The land covering more than 1000 ha are no longer than 160 ha and the Revolution the castle was already in poor condition. Close to the line, it was the seat of the Kommandantur during World War II. The entrance is via a fixed bridge and gatehouse of the fifteenth century on a terrace lined arcades seventeenth century. The tower of the sixteenth century lintel decorated with three coats of arms of Raymond, and Ranconnet Galard of Béarn. The dwelling in part of the fifteenth century, remodeled in the eighteenth century has a large vaulted cellar. A watchtower overlooking the moat. The house still has its old paving tiles and period ceilings. One part, the gatehouse, the west wing joint, the house, the terrace and the tower was listed historic monument April 14, 1997.