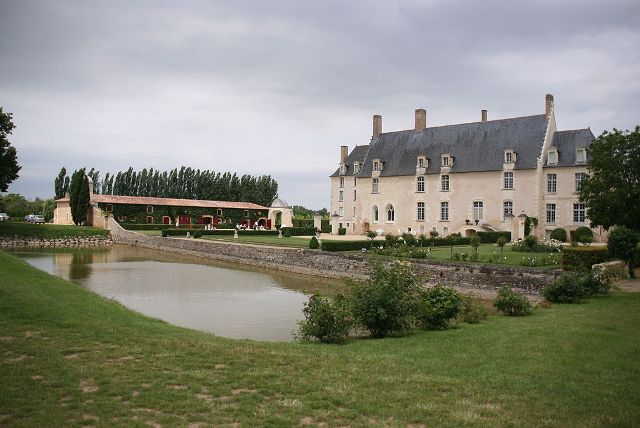 Location: Saint-Martin-de-Sanzay, in the Deux-Sèvres departement of France (Poitou-Charentes Region).
Built: 15th-19th century.
Condition: In good condition.
Ownership / Access: Privately owned.
ISMH Reference Number: PA00101354
Notes: The Château du Bois de Sanzay is in Saint-Martin-de-Sanzay in Deux-Sèvres. The current building is a building of the fifteenth century, rebuilt in the eighteenth century, combining stone and limestone rubble. The fifteenth century remains only the central block with its roof steep, tall brick chimneys decorated gables and slate hooks. In the attic, there is a firm forming herringbone structure, with the remains of Gothic 3 fireplaces, and on the west gable, a watchtower whose end was razed during the construction of two wings at the end of the eighteenth century . The door and the arches of the chapel and the caves, also date from the fifteenth century. In one of the caves is the well which was used to supply the kitchens and an old fireplace. An inventory from 1745 mentions an external spiral staircase, which was replaced in the nineteenth century by a wide wooden staircase. Openings with the exception of the chapel have all been redesigned in the eighteenth century, both as regards the windows themselves as skylights garrets. It is found in the chapel, in addition to an inscription dated 1749 that mentions the work of Francis of Aviau of Piolan different emblazoned on the keystones belonging to Beaumont Bressuire, Argenton Harcourt and Aviau for " lion tailed crossed in saltire. " Bypassing the building, there is a dovecote or "Fuye" still has its boxes and its turntable ladder. The common courtyard is marked by two large gates tufa stone, hammered pediments of the eighteenth time. The castle is surrounded by a park.

How To Get To Château du Bois de Sanzay (Map):