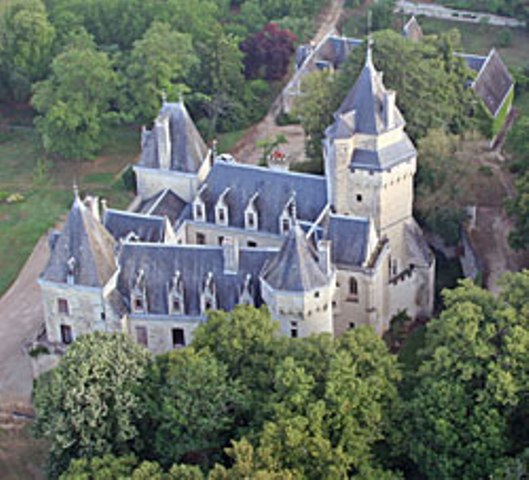 Location: Ternay, in the Vienne departement of France (Poitou-Charentes Region).
Built: 15th century.
Condition: In good condition.
Ownership / Access: Owned by a private company.
ISMH Reference Number: PA00105739
Notes: Château de Ternay is a French château located in the municipality of Ternay in the department of Vienne, in the region Aquitaine-Limousin-Poitou-Charentes.The castle and chapel were built in the fifteenth century by Bertrand de Beauvau, first vassal of King Charles VII of France. The construction began in 1439 and lasted thirteen. Bertrand de Beauvau brought Ternay Venetian artists who carved the decorations of the chapel. At his death in 1474 at the age of 93, is his son toddler who inherited the castle, all his son having died before him. In 1574, Claude de Beauvau who is Protestant, murders his neighbor Jacques Arsac, Catholic. After twenty-four years of trials, the widow of Jacques Arsac gets death sentence in absentia of Claude de Beauvau, and confiscation of all his property. The castle thus passes into the hands of Arsac in 1606. In the late seventeenth century, the lords are undertaking important work in the castle: construction of a main building with mansard roof. In 1792 the castle was sold as national property and bought in 1804 by Marie-Adelaide Cantineau of Commacre, widow of Gabriel Arsac, former Marquis de Ternay, deputy of the nobility, who died in 1796. Their only son, Charles Gabriel , died in Portugal in 1813, the castle was given to Charles Marie Aviau of Piolan. The new lord undertakes significant work in 1864, construction of stables, destruction of the wall and bridging the gap, changing west wings, north and south. The present castle has the appearance of it in 1880.

How To Get To Château de Ternay (Map):