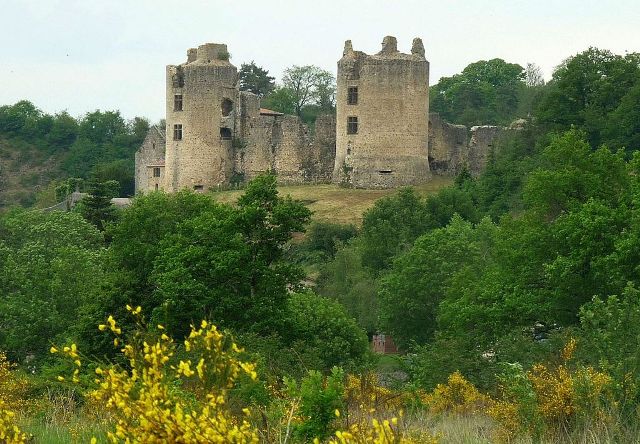 Location: Saint-Germain-de-Confolens, in the Charente departement of France (Poitou-Charentes Region).
Built: 12th century.
Condition: Ruins.
Ownership / Access: Owned by the town.
ISMH Reference Number: PA00104502
Notes: Château de Saint-Germain-de-Confolens is at the confluence of the Vienne and Issoire to Saint-Germain-de-Confolens in the Charente, there are only ruins. The first lords of Saint-Germain are known Helie in 1073 and in 1087 Conis. In 1498 it was sold to Gauthier Peruse des Cars and passes to his descendants. In 1570 the fortress was taken by the Protestants and then taken by Jean des Cars. The fortress is sold as national property, demolished and ruins are repurchased in 1900 by the priest Laffay, given to the bishopric, then taken over by the tourist office of Confolens. A square tower was built in the twelfth century and the thirteenth century tower of the Well and the fifteenth century the two large round towers with three floors, high of 18 meters and the house. The third round of the so-called kitchen had six floors and a fourth tower, a gatehouse and a second wall line that was recently restored, completed the defenses. The ruins consist of two huge towers, connected by a main building. These towers have the distinction of being round outside and square inside. The castle ruins were listed as a historic monument on May 14 1925. The chapel whose shape of a Greek cross is rare Date of the twelfth century and has a crypt. She became the parish church of St. Vincent. It was listed as a historical monument October 24, 1973.

How To Get To Château de Saint-Germain-de-Confolens (Map):