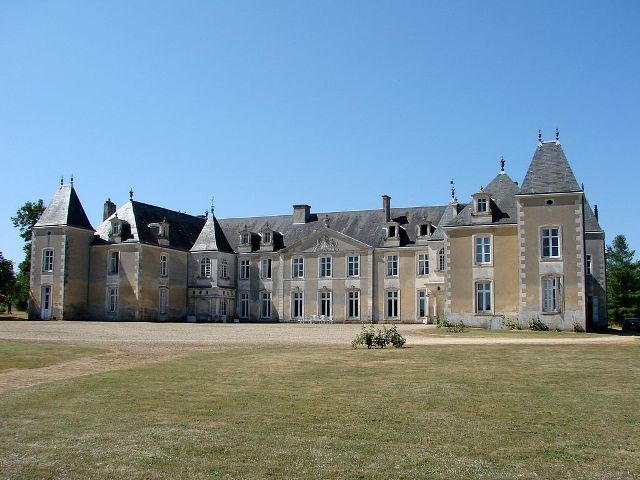 Location: Port-d'Envaux, in the Charente-Maritime departement of France (Poitou-Charentes Region).
Built: 17th-19th century.
Condition: In good condition.
Ownership / Access: Privately owned.
ISMH Reference Number: PA00104852
Notes: Château de Panloy is located in Port-d'Envaux Charente-Maritime. The castle belongs to the same family since its construction, it has never been sold, thus its interior and furniture are authentic. It is still inhabited by the same descendants, those in the House Grailly and especially by John Grailly. The park, designed in the eighteenth century was remodeled in the nineteenth century, it is recorded in pre-inventory Remarkable Gardens. The main aisle was traced to the eighteenth century. There is a hedge. Near the river, a former garden divided into six square was surrounded by tanks. The nineteenth stables of impressive dimensions clearly show the first function of the castle summer residence and hunting; o the boxes, nor kept horses are named, a large room also used to store the horse-drawn carriages. These stables are now used for equestrian pensions to the castle. Guided tours of different parts of the castle lounges, dining room, hunting gallery, bedroom and attic. All rooms are furnished with period furniture and original; visitors can discover unusual objects, witnesses of the old life, including a sedan chair of the eighteenth century with its two poles (which is quite rare because many of them were later transformed into windows) and a bathtub metal and wood base with wheels Louis XV, or a calèche.qui trumpet was used to announce the arrival of a crew. The gallery has 150 hunting trophies.

Visit outside: free tour of the stables, loft, chapel, laundry, bakery and gardens. Site open to visitors from April 1 to November 1, daily except Monday from 10am to 12pm and 14pm to 18pm. From 15 June to 15 September open daily from 10h to 19h.