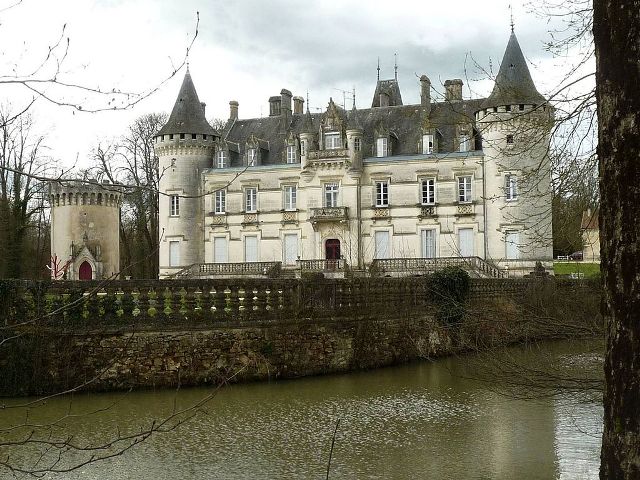 Location: Nieuil, in the Charente departement of France (Poitou-Charentes Region).
Built: 16th-19th century.
Condition: In good condition.
Ownership / Access: Private property. Now a Hotel.
Notes: Château de Nieuil is in the municipality of Nieuil, Charente, France. A first castle was built in the time of Francis I had this place a hunting lodge. The first known lord was in 1467 Bernon Jaubert, Esq. Then between the sixteenth and eighteenth century, the castle belongs to the Green Saint-Marsault, until marriage of Suzanne Green, lady Nieuil in 1724 with John Perry, Knight and Lord of Montmoreau. Between 1724 and the Revolution, the castle belongs to Perry. In 1883, the William Count Guy of Dampierre (1849-1906) bought the land and made entirely of Nieuil build the present castle with the help of the architect Alexandre Mignon Charente. This new castle was built on the lawn of the old castle, of which only a tower remains. Guy de Dampierre did grow there in 1900 the vineyard Brénanchie known locally. In 1937 he was among the first castles of France converted into hotels by Fougerat family, grandparents owners Luce and Jean-Michel Bodinaud. The plan of the castle is kept by the land registry of 1818. He had two wings at right angles, and was surrounded by basins like the present castle. A castellated round tower remains north of the current castle. The architecture of the present castle is the nineteenth century. The castle is in white limestone, with steep roofs covered with slate. It is surrounded by a pool with three sides, north, west and south. The castle is listed monument since 2014.

How To Get To Château de Nieuil (Map):