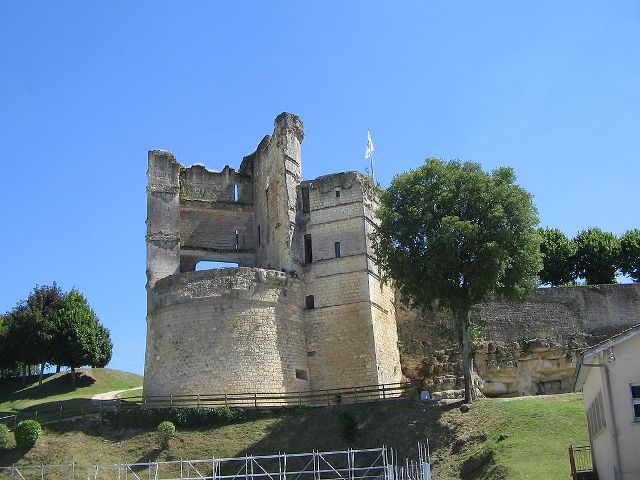 Location: Montguyon, in the Charente-Maritime departement of France (Poitou-Charentes Region).
Built: 11th century.
Condition: Ruins.
Ownership / Access: Owned by the town.
ISMH Reference Number: PA00104814
Notes: Château de Montguyon is a medieval fortress in Montguyon, Charente-Maritime. This is a powerful fortress from the eleventh century. In 1404, Rosine Montguyon the dowry to Guy de La Rochefoucauld and La Rochefoucauld family retains until 1683 and its sale on execution. In 1451, following the Battle of Montguyon, Dunois releases the fortress of the British presence. It is a Protestant stronghold during the religious wars. Henry of Navarre, the future Henry IV stayed there several times between 1571 and 15862. In 1621, 7 and 8 July, King Louis XIII and Anne of Austria stayed at the castle. In 1683, Pelagie Rohan Chabot bought the barony which remains the property of Rohan until the Revolution. In 1793, lightning that hit the turn, caused a fire. It is a ruin which is sold as national property. From 1980 to 1984, A.S.P.H.M. going to restore the castle stables. From 1996 to 2001, the Association for the Protection and Promotion of Heritage Montguyon fact consolidate and rebuild the walls of the fortification. The old tower is included in the inventory of historical monuments, February 11, 1929, the order was canceled and replaced by the inclusion of the entire castle, and remnants of the old stables, July 23, 2004.

How To Get To Château de Montguyon (Map):