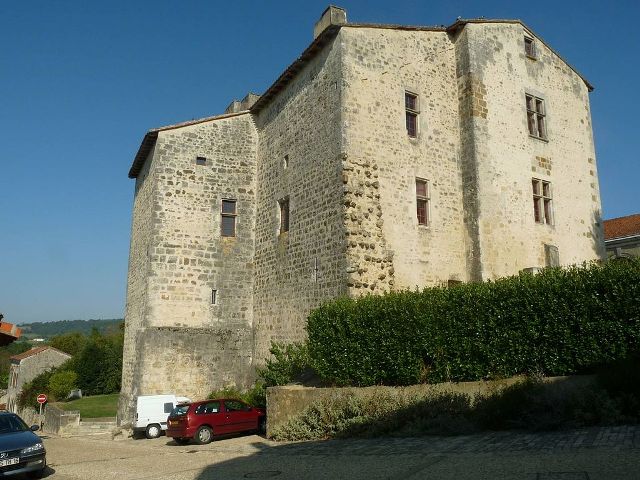 Location: Montbron, in the Charente departement of France (Poitou-Charentes Region).
Built: 12th-19th century.
Condition: In good condition.
Ownership / Access: Privately owned.
ISMH Reference Number: PA00104424
Notes: Château de Montbron, locally called the Vieux Château, is located in Montbron, Charente. The ancient castle of Montbron, name derived from "Mons Berulphi" is attested from before the twelfth century. In the fifteenth century it was razed, with its rectangular primitive keep as a sign of infamy, by order of King Charles VII. Marguerite de Rohan, Countess of Angouleme (wife of the good Count John) had rebuilt the castle with some parts still remain, such as the Romanesque tower. The last member of the senior branch of the family of Montberon Montberon wife Jacquette André Bourdeille in 1558 and brings the lordship which then passes to the hands of Louise of Savoy (Angouleme Countess and mother of Francis I). In 1624, the heirs of Henri of Luxembourg must sell County Montbron Loménie family, who retain Montbron and the County of Brienne until the late seventeenth century. In 1699, Stephen Chérade acquires County. His grand-son Adrien-Etienne Alexandre Chérade Montbron secured by letters patent of December 1766 the erection of his lordship in county of Montbron but he is dispossessed by the Revolution. There remains only the polygonal tower. Drawings show a single slope roof building. The keep was pierced with rectangular windows in the seventeenth century Both painted fireplaces dating from the seventeenth century and located on the first floor are classified.

How To Get To Château de Montbron (Map):