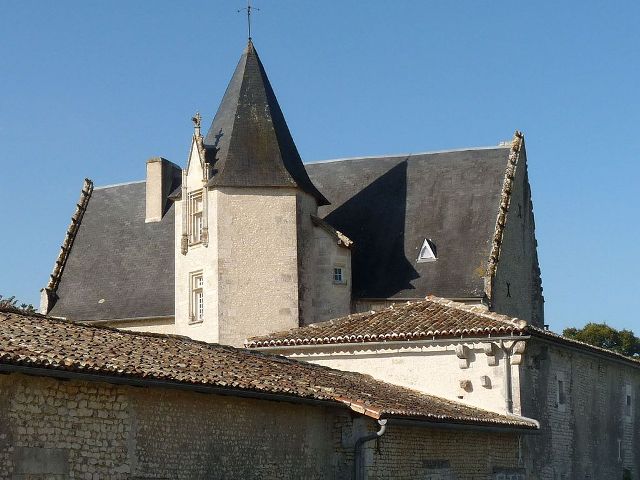 Location: Meux, in the Charente-Maritime departement of France (Poitou-Charentes Region).
Built: 15th century.
Condition: In good condition.
Ownership / Access: Privately owned.
ISMH Reference Number: PA00104806
Notes: Château de Meux is in Charente-Maritime in the town of Meux. The first Meux Castle dates back to the thirteenth century. Geoffrey and his son Thomas Meux were the first lords. The land of Meux is brought as a dowry in 1444 to Louis Chesnel who rebuilt the castle. It is inherited in Jacques de Laage who sells it in 1719 to Antoine Bonnet, who sold it in 1721 to Elie de Laage. The castle and common is the subject of a registration as a historic monument since April 25, 1975. It is a French garden restored in 1972, with eight yews trimmed cone marking the intersection of the aisles and the four squares of lawn. He worked in the green of the lawn, yews and euonymus and red lines of small roses. A rose garden complete this garden. A trimmed hedge separates the park planted with species chosen for their colors. The kitchen garden and orchard complete this traditional gardens.