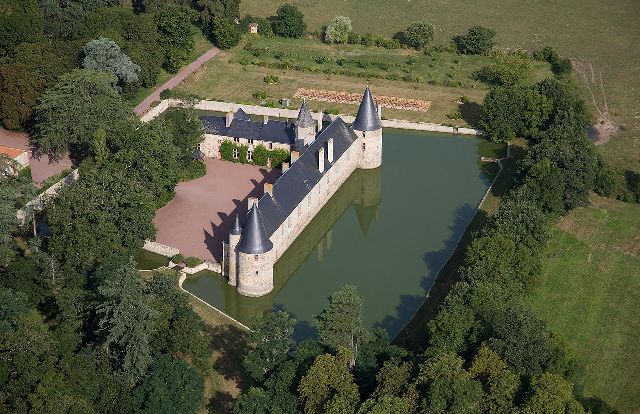 Location: Maisontiers, in the Deux-Sèvres departement of France (Poitou-Charentes Region).
Built: 15th-19th century.
Condition: In good condition.
Ownership / Access: Private property.
ISMH Reference Number: PA00101252
Notes: Château de Maisontiers is a French castle in Maisontiers in the Deux-Sèvres department in Aquitaine-Limousin-Poitou-Charentes. It is the subject of protection as historical monuments. The castle is located east of the village of Maisontiers between the provincial road 137 which its entrance is located, and the stream Taconnière. It seems that existed from the thirteenth century to Maisontiers a stronghold of the Knights Hospitaller. In the late fifteenth century, Claude Montjehan buys buildings, then changes the order to build the present castle. She sells 21 May 1544 at the Bernardière Guyonne, wife of René de Tusseau. The castle, partly registered as historical monuments since 1957, then in whole since 2005 (and its area), is a historical monument since late 2013. The west wing that has reshaped Claude Montjehan, is the part the oldest. The most recent, the stable, the date of the nineteenth century. Castle Maisontiers is remarkable for its moat, which northeast reach 110 meters long and 40 meters wide.