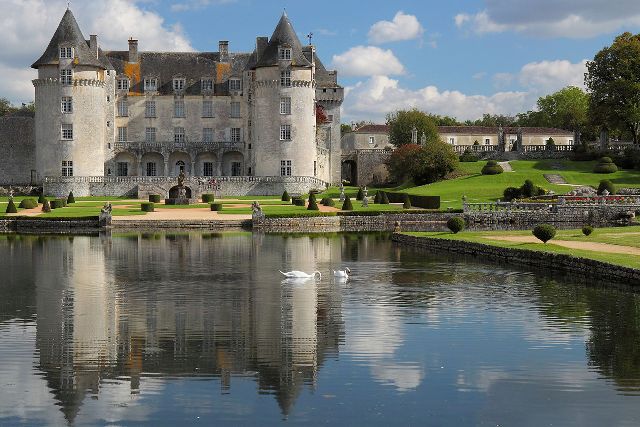 Location: Saint-Porchaire, in the Charente-Maritime departement of France (Poitou-Charentes Region).
Built: 15th-17th century.
Condition: In good condition.
Ownership / Access: Owned by a private company.
ISMH Reference Number: PA00105221
Notes: The Château de la Roche-Courbon (or Rochecourbon) is located in the municipality of Saint-Porchaire (Charente-Maritime). After a first partial classification in 1924, the castle, all the old buildings, terraces, gardens and moats were classified historic monument by order of 17 September 1946.1 The gardens are also labeled remarkable garden. In the cliffs on the right bank of the ancient river became modest Bunting, was excavated in ancient times, a complex network of caves with monumental entrances. This is where settled successively men Mousterian times (120,000 years), Aurignacian (40,000 years) and Magdalenian (10,000 years). The excavations have uncovered, in a layer Aurignacian caves, the skeleton of a man logically dated from this period; but recent analyzes have considerably rejuvenated since it has been clarified that this man died around the year zero of our era. He also is presented in the museum. It is the hinge between prehistory and history A major furniture in these populations were found there. One can discover the prehistoric museum, restored from 2010 to 2012, on two levels in the tower porch. On 14 September 2007, two amateur archaeologists cave-announce to the public the discovery of a wafer etched in the Triangle cave. This has been authenticated by specialists of the Human Museum.

How To Get To Château de la Roche-Courbon (Map):