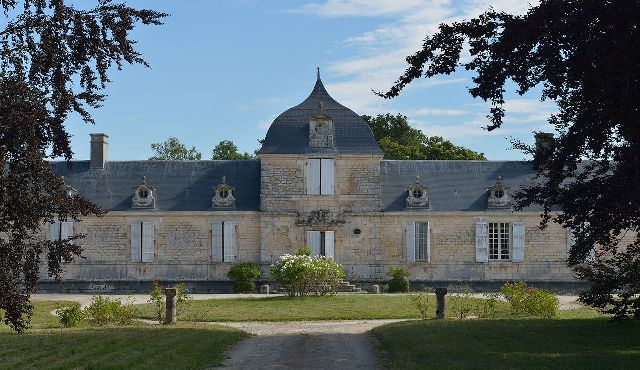 Location: Ecurat, in the Charente-Maritime departement of France (Poitou-Charentes Region).
Built: 17th century.
Condition: In good condition.
Ownership / Access: Owned by a private company.
ISMH Reference Number: PA00104679
Notes: Château de la Morinerie is in Écurat in Charente-Maritime. That is, although unfinished, a beautiful example of seventeenth-century castle influenced by military architecture. It was planned to 80 meters long, with a central pavilion and two lower wings of six bays ending in a square pavilion floor, but the southeast wing and pavilion were arrested in the 2/3 height. The main lodge has a floor and a roof hull with a door, a window to the floor and roof of a round opening ornate stone facade. The square pavilion has a high roof slate. One wing was built back later At the end of the nineteenth century, the roofs of the wings have been enhanced and Roman tiles replaced by slates. It was listed as a historic monument December 3, 1969. The park of the castle of Morinerie enrolled in pre-inventory of remarkable gardens.

How To Get To Château de la Morinerie (Map):