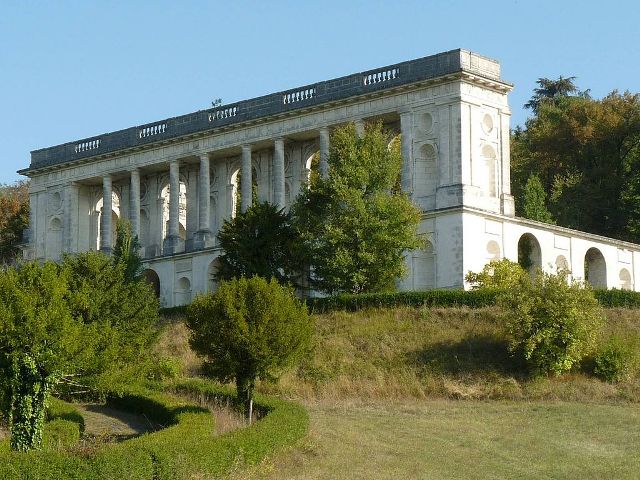 Location: Magnac-Lavalette-Villars, in the Charente departement of France (Poitou-Charentes Region).
Built: 19th-20th century.
Condition: In good condition.
Ownership / Access: Owned by a private company.
ISMH Reference Number: PA00104405
Notes: Château de la Mercerie is located in the town of Magnac-Lavalette-Villars (Charente). Enlarged in the twentieth century in a classic Italian Renaissance style by the will of two men but never completed, it is nicknamed the Versailles Charentais. Located 5 km northwest of Villebois-Lavalette and 17 km southeast of Angouleme, close to the Dordogne, the castle is built on the side of the Puy de Magnac, outlier on the line watershed between Charente and Garonne. It is visible from many parts of the South Charente. It is reached by the D.81 from Angoulême and Torsac or D.5 from Villebois. In 2002 a restoration project was developed by Isabel Guerin, whose purpose is to revive the site by giving the opportunity to host contemporary art collections. In 2008, the castle was sold to Parisian property company Volta. In 2011, a long lease of 75 years was signed on August 22 between the company owner and the municipality of Magnac-Lavalette. The town, with a voluntary association Saint-Étienne Heritage, then undertook a restoration of parts and built works of art to open the castle to visitors in summer from 201310. The Italian restaurant is responsible for four months a year collections. Triumph of Christ a ton rose to the ceiling with a height of 8.70 m.

How To Get To Château de la Mercerie (Map):