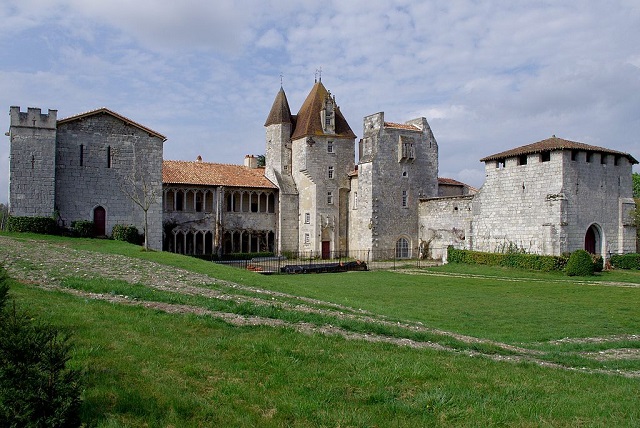 Location: Nonac, in the Charente departement of France (Poitou-Charentes Region).
Built: 15th-18th century.
Condition: In good condition.
Ownership / Access: Privately owned.
ISMH Reference Number: PA00104446
Notes: Château de la Léotardie is located in Nonac in Charente. The castle was built Léotardie 1 km east of the village under Helie Leotard, archdeacon of Bourges, attached to the house of Hugh le Brun, Count of Angouleme, in the thirteenth century. This house was rebuilt in the fourteenth century and renovated in the fifteenth century. The Chavalier of Léotardie was a Catholic fanatic during the wars of religion. The castle of Léotardie was closed and fortified complex around a courtyard, in which there are only three sides of this vast rectangle. It remains a square crenellated tower of the fourteenth century, the door opens onto a second door in a wall topped with a gatehouse. The main building of the fifteenth century with floors accessible by a spiral staircase in an octagonal turret buttress includes a pavilion in the fifteenth century mullioned windows and the house has two square corner turrets as the wing back. Renaissance gallery of indeterminate age as could have been built by reuse of components of a cloister. A medieval ranks triple nave is located a hundred meters from the other buildings. It was remodeled in the eighteenth century and later, and registered historical monument in 1944.

How To Get To Château de la Léotardie (Map):