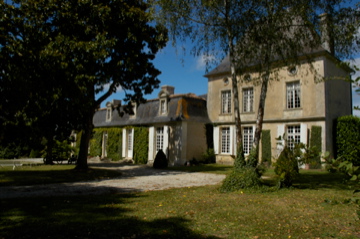 Location: Villexavier, in the Charente-Maritime departement of France (Poitou-Charentes Region).
Built: 17th century.
Condition: In good condition.
Ownership / Access: Privately owned.
ISMH Reference Number: PA17000084
Notes: Château de la Faye is located in Villexavier in Charente-Maritime. The Lordship of Faye belonged to the family Guinanson the fifteenth century. She is seized and sold in 1683 to Louis-Claude de Saint-Simon-Montbleru. Claude-Anne de Rouvroy, Marquis and Duke of Saint-Simon, field marshal and deputy of the nobility of Angoumois to the States General in 1789 and emigrated La Faye is sold as national property. The castle built in 1666 was partially destroyed in the nineteenth century it formed a U and the current castle is the former right wing. The home is down with bell-cast roof with skylights drilled high scroll and semi-circular pediment exceeding the bell-cast roof. The big roof pavilion is high hipped slated. February 26, 2010, the castle was listed under the historical monuments.