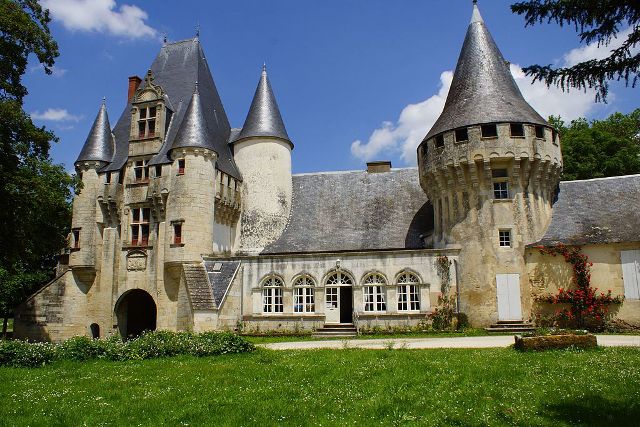 Location: Chef-Boutonne, in the Deux-Sèvres departement of France (Poitou-Charentes Region).
Built: 1514.
Condition: In good condition.
Ownership / Access: Owned by the town.
ISMH Reference Number: PA00101216
Notes: Château de Javarzay is Chef-Boutonne one of the finest examples of Renaissance architecture in the Deux-Sèvres.The primitive castle included a wall flanked by twelve towers, it remains only two. Javarzay Castle was rebuilt in 1514 by members of the House of Rochechouart. The family of Rochefoucauld, Count de Pontchartrain, minister of Louis XIV, Guillaume-Chrétien de Lamoignon de Malesherbes, lawyer of Louis XVI, were owners. Jerome Phélypeaux, chancellor of France, bought the land Javarzay in 1712 for the sum of 100 000 pounds. His wife Christine de La Rochefoucauld (called miss Chef-Boutonne). In 1785 at least, the owner is Joseph Michel Blois, counsel to the military courts during the Revolution. His daughter, Marie-Anne (born in the castle in 1787) married Achille Angelo Brunet, Earl of Neuilly. It remains of the castle, the largest of the time in Deux-Sèvres, the building that joins the two towers and the chapel. The left wing was destroyed and the right wing is a later construction. The wall was demolished between 1820 and 1824 and the sculptures disappeared. The orangery date of 1854. Castle Javarzay was a historical monument in 1862.