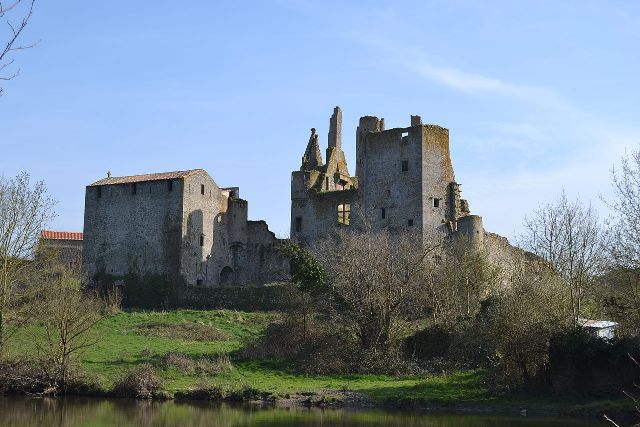 Location: Glénay, in the Deux-Sèvres departement of France (Poitou-Charentes Region).
Built: 12th century.
Condition: Ruins.
Ownership / Access: Privately owned.
ISMH Reference Number: PA00135590
Notes: Château de Glénay is located in France in the municipality of Glénay in the Deux-Sèvres department.The first foundations were built in the early twelfth century away from the village on a small steep rock dominating the Thouaret. Originally, this fortified house was occupied by a captain who supervised fording the river. Later the Lord came to live in this place and did change the fortified house to turn it into the twelfth century castle in the fourteenth century. In 1386 Lord John of Beaumont had restored the fortifications damaged during the Hundred Years War. After the Wars of Religion, the castle was restored, redesigned and enlarged. The apartments are designed in the central building renaissance, with mullioned windows. Holy-Marguerite chapel is fitted next to the huge leak. Over the centuries, three families succeed in places, Beaumont, Saint-Gelais of Lusignan and the early seventeenth century the Vignerot of Pontcourlay, later to become Duke of Richelieu. Cardinal Richelieu stayed for a few months during the years 1610 and 1611 with his brother, René Vignerot of Pontcourlay, souffranta. The destruction of the building begins with the Revolution. Mortuary sculpture of Réné Vignerot of Pontcourlay and his wife, Françoise du Plessis, were displaced in the twentieth century of the church of Glenay to the chapel. The castle has multiple protections as historical monuments: a registration April 18, 1995 (facades and common roofs) and ranking 31 July 2000 (Logis, chapel and loft). It is a private area and it remains today, the dove off the coat of arms of Vignerot Pontcourlay, holy-Marguerite chapel and chimneys among the remains of the main building.