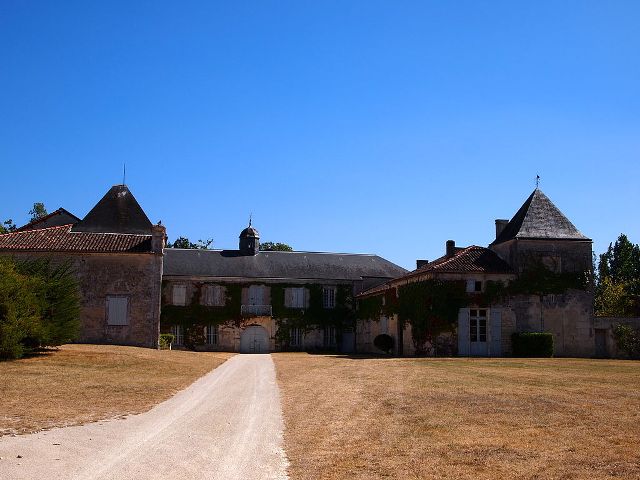 Location: Saint-Amant-de-Nouère, in the Charente departement of France (Poitou-Charentes Region).
Built: 16th-17th century.
Condition: In good condition.
Ownership / Access: Owned by a private company.
ISMH Reference Number: PA00104556
Notes: Château de Fontguyon is located in the municipality of Saint-Amant-de-Nouère Charente. It is on the site of a Gallo-Roman villa and a Carolingian villa, the Mayne Négronde attested in 911 that Fontguyon Castle was built in the sixteenth century, around 1570, on the field Fontguyon. This castle was particularly owned by William of La Porte, prevails marshals of the duchy of Angouleme, Elijah Laisné mayor of Angoulême in 1585, Antoine GANDILLAUD his son-mayor of Angoulême in 1623, Gabriel I GANDILLAUD lieutenant general and adviser state and Gabriel GANDILLAUD I also lieutenant general. Then, the castle reached François and Pierre Poitevin Fontguyon, directors royal foundry from 1784 to 1790. The main building U thus consists of three wings, opens onto a large courtyard. It was rebuilt in the seventeenth century with development of the terrace and stairs horseshoe. The entrance has a gate pillar accosted a corner watchtower overhanging wearing a pepper shaker. The chapel and the spiral staircase with its cage, located at the southeast corner of the house are from the Renaissance period. It is registered historic monument since 8 September 1989 and the spiral staircase renaissance was ranked 2 September 1994.

How To Get To Château de Fontguyon (Map):