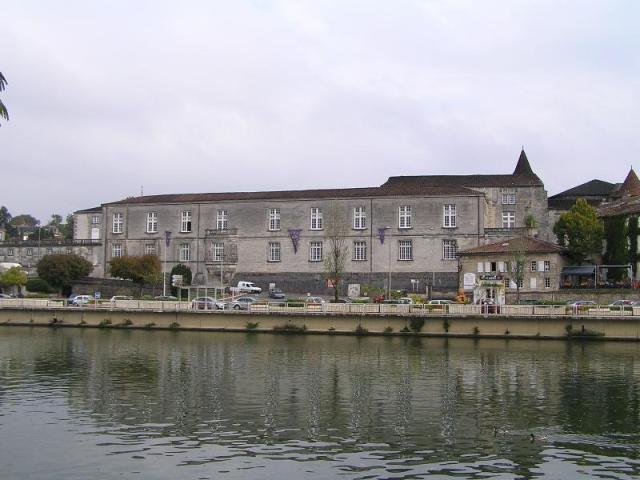 Location: Cognac, in the Charente departement of France (Poitou-Charentes Region).
Built: 14th-16th century.
Condition: In good condition.
Ownership / Access: Owned by a private company.
Notes: Rebuilt several times, Château de Cognac, also called castle or chateau Valois Francis I, is a monument in the French town of Cognac and existing since the tenth century. From the Saint Jacques, the medieval bridge that was demolished in 1855 spanned the Charente facing the two towers and battlements trefoil curtain constructed from 1499 to 1500, replacing square towers; it is virtually all that remains of the walled enclosure of the city. The castle has an imposing front left door with the quays at his feet. This very sober façade, built around 1517 and raised about 1852, is enlivened by a large window called "king of the balcony", decorated with carved medallions (with especially Francis profile) and is based on two salamanders that frame a coat of arms. The tower of Count Jean is, once the doors of the past town to the left. It dates from the thirteenth century, has from the fifteenth century with an inner shaft curbs on all floors; the first floor the two rooms have fireplaces and mullioned windows. There remains a rare ovens médiévales3 system. The "home of the governor" has a fine Gothic doorway and a turret with spiral staircase. The "room of the helmet" is named for the decoration of the monumental fireplace: in a plumed helmet, lying blazon of the Valois-Angoulême and three lilies. Part of its north wall is the twelfth century. On his wall are buried the remains of the thirteenth century Gothic arches, capitals decorated with palm leaves, as well as columns and capitals only remains of the castle chapel. A small vaulted room follows it by a door with weapons comtales right of the fireplace. In the cellars, two vaulted rooms, a small corridor and a paved floor are the only remains of the twelfth century.

How To Get To Château de Cognac (Map):