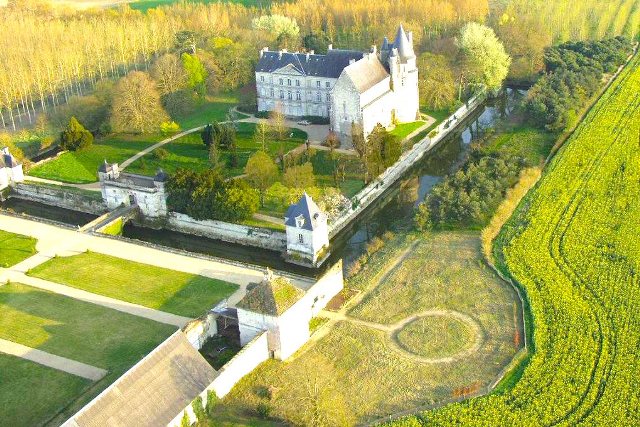 Location: Scorbé-Clairvaux, in the Vienne departement of France (Poitou-Charentes Region).
Built: 15th-18th century.
Condition: In good condition.
Ownership / Access: Privately owned.
ISMH Reference Number: PA00105724
Notes: Château de Clairvaux is located in the municipality of Scorbé-Clairvaux, in the department of Vienne. The castle is the subject of a classification as historical monuments since June 13, 1929.The Château de Clairvaux is one of the very first examples of the Renaissance in Poitou: these buildings can be dated from the early sixteenth century. In 1470, following a brawl between the two lords of Clairvaux, Christophe de la Tour Landry, and Renaud Chabot, it descends into the valley and began construction of a new castle, located near the fairgrounds . Rene de Villequier, governor of Paris and Ile de France, acquired in 1580 the two areas of Clairvaux, and erected in the manor County. Abandoning the Top Clairvaux, he comes to live in the valley, where it expands and embellishes the castle. It creates a monumental entrance, consists of a main building flanked by two square pavilions, the center of which opens a portal. Favorite of Henry III, treasurer and chamberlain during his reign over Poland, it helps the king to flee the Royal Palace in Krakow after the death of his brother Charles IX. René Villequier is the first holder of the Order of the Holy Spirit, order created by King. He frequently receives Henri III, and one room for the big tower named after him. He does realize an ornate balcony attributed to Philibert Delorme, French Renaissance architect. Caesar Aumont, grand-son of Villequier, governor of Touraine, erected in the County Marquisat by letters patent of Louis XIII in 1620, and there deputy barony of Thuré. He has six daughters, one of Aumont Anne, Marchioness of Clairvaux, Viscountess of Guerche, married in 1660 Gilles Fouquet, first equerry to the Grand Stables of King, brother of the famous superintendent of finances of Louis XIV. Gilles Fouquet has big ambitions for Clairvaux, and made several improvements. He built spacious common around the courtyard, and four pavilions at the corners of the rectangle formed by the moat of white water, changes the castle entrance postern, and decorates the area of ​​a huge park whose gardens are attributed to Lenôtre. But the buildings are suddenly stopped by the arrest of Nicolas Fouquet in Nantes by d'Artagnan, and the exile of Gilles with his brother in Pinerolo, where he died in 1694.