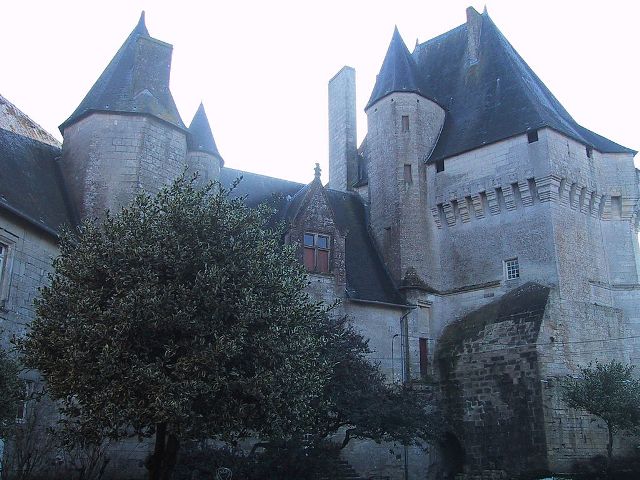 Location: Cherveux, in the Deux-Sèvres departement of France (Poitou-Charentes Region).
Built: 12th century.
Condition: In good condition.
Ownership / Access: Privately owned.
ISMH Reference Number: PA00101219
Notes: Château de Cherveux is located in the town of Cherveux in Deux-Sèvres department. It is the subject of a classification as historical monuments since 16 September 1929.Originally, it was a simple motte. Cherveux is mentioned in 1100 as a dependency of the abbey of Saint-Maixent. It then passes into the hands of Lusignan and became a fortress. The house of Lusignan acquired from the Middle Ages a power that enabled Guy of Lusignan to the throne of Cyprus and Jerusalem - island conquered by Richard the Lion Heart in the early twelfth century. The legend gives the castle a very ancient origin, the Fairy Melusine "Mother Lusine" the builder fairy, half woman, half snake ... and maybe the fortress arose a dorne stones that dropped a night of "black moon" while flying over the region Poitou ... It was confiscated in 1242 by the Lusignan Saint Louis on Hugh XI of Lusignan, who had trouble with the king and given by him to his brother Alphonse, Count of Poitou. The castle was returned to his descendants because he made his submission and returned to grace (he accompanied the king to the crusade and died in a fight arriving in Egypt in 1249). In 1303 the castle passed thereafter to Mello and the Craon and Chalons. He was seized by the British in 1363 during the reign of Edward III gave William Felton, Seneschal of Poitou. But after the victory of Duguesclin in 1369, the lordship of Cherveux returns to its former owner Amaury de Craon. Then succeeded Guy of Trémoille (Chamberlain, prime minister and ruler of the kingdom of Charles VII), Louis Trémoille sold Cherveux in 1457 to Amaury Étissac (lord of Coulonges-les-Royal) who gave it to John who Naydes in turn sold it to the Chenin family. Their daughter Louise Chenin married Robert Conningham in May 1440. Of Scottish origin (Clan Cunningham (in)), captain of the guard of the king's body (well in court with Louis XI), Cunningham had the means to raise Castle, ex nihilo, in its current form in one go, 1470.

How To Get To Château de Cherveux (Map):