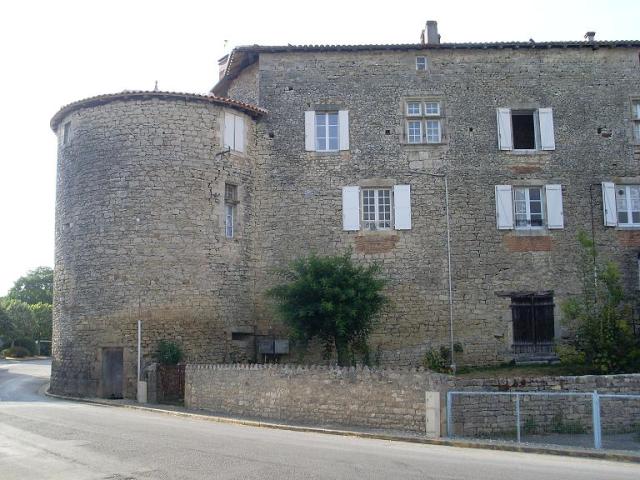 Location: Champagne-Mouton, in the Charente departement of France (Poitou-Charentes Region).
Built: 15th century.
Condition: In good condition.
Ownership / Access: Private property.
Notes: Château de Champagne is located in the municipality of Champagne-Mouton, in Charente, in the town center.The first Champagne-Mouton lords would Ildegaire and his son Peter, in the twelfth century, related to the family and relatives of Rochechouart Montembœuf. Guy VII de La Rochefoucauld, who died in 1350, is mentioned in texts like Champagne-Mouton lord. Eymeri his son and his grandson, son, Fulk be lords of Champagne. Champagne-Mouton is from the Middle Ages, the seat of a lordship having high right, middle and low justice, and under the Maubergeon turn to Poitiers. This lordship is important and has jurisdiction over all or part of twelve parishes. Champagne in 1427 the manor was erected in barony and passes into the hands of the family of the House, Scottish (Chambers). It's Christin La Chambre commander of the Scottish guard of Charles VII, who built the castle. The family of the Chamber retains the barony of Champagne until the late sixteenth century. Champagne-Mouton castle is mentioned at the beginning of the fourteenth century in a terrier of the diocese of Poitiers. But this first castle was probably shaved during the Hundred Years War; as his deputy, and which still exists today, does not go beyond the second half of the fifteenth century. In 1601, the barony of Champagne-Mouton returns to the family of La Rochefoucauld, in the person of Charles de Roye de La Rochefoucauld. The last Lord of Champagne who stayed at the castle is probably the Dowager Duchess de La Rochefoucauld, who came in 1780. The castle was used for the internment of 150 Spanish prisoners and was sold in 1807 to the Countess de Castellane, who sold it to Mr. Bechemilh-Chatenet.