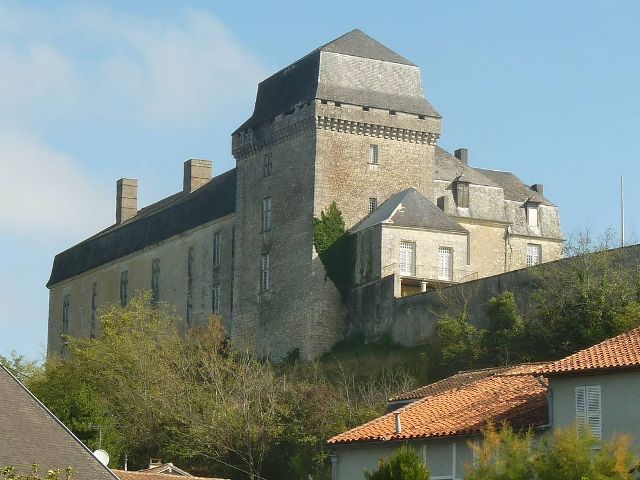 Location: Chalais, in the Charente departement of France (Poitou-Charentes Region).
Built: 11th century.
Condition: In good condition.
Ownership / Access: Owned by a municipal public institution.
ISMH Reference Number: PA00104272
Notes: Château de Chalais stands on a rocky outcrop between the Tude and Viveronne, where it overlooks the city of Chalais (Charente).The castle is attested from the eleventh century: Helie, Lord of Chalais, is present at the consecration of the Abbaye aux Dames de Saintes. Agnès de Chalais, only backward, wife Helie de Talleyrand and Talleyrand took the thirteenth century the title of princes of Chalais. During the Hundred Years War the castle was occupied by the English, and when Jacques de Chabannes, Lieutenant Charles VII shows the June 17, 1453 (one month before the Battle of Castillon) dismantles it. François de Talleyrand made rebuild in the early sixteenth century; Only a square tower of the fourteenth century had survived. Of this construction remain today the gatehouse and main building. Françoise de Montluc, daughter of Blaise Marshal Montluc, it withdrew after the disgrace of his family after the affair of Chalais (conviction for treason of crime and execution of Henri de Talleyrand, Count Chalais aged 27, in 1626 by a novice executioner). It launched a large-scale work program which remains inside the castle's private chapel. The famous politician Talleyrand stayed there in his youth, between 1758 and 1761. It was hosted by his great-grandmother, Marie-Françoise de Rochechouart-Mortemart. During the Revolution, the Prince of Chalais not emigrated. He was simply imprisoned as a suspect, and kept its local properties. When he died in 1883, Roger Helie-Louis-de Talleyrand, the last prince of Chalais, bequeathed the castle to the hospitals of the town of Chalais, creating an old people's home in the same castle. Sale of tapestries of the castle in 1896 was paid to the hospice. In 2011, hospices put the castle on sale for lack of sufficient resources to be able to maintain it. The monument was bought in late 2011 by a personality of the show and television, the imitator Yves Lecoq who has a passion for old stone and is not to rescue the first castle. The castle has a double protection to historical monuments: an entry 4 September 2002 for all buildings constructed and classified on 1 April 2003 to the gatehouse.

How To Get To Château de Chalais (Map):