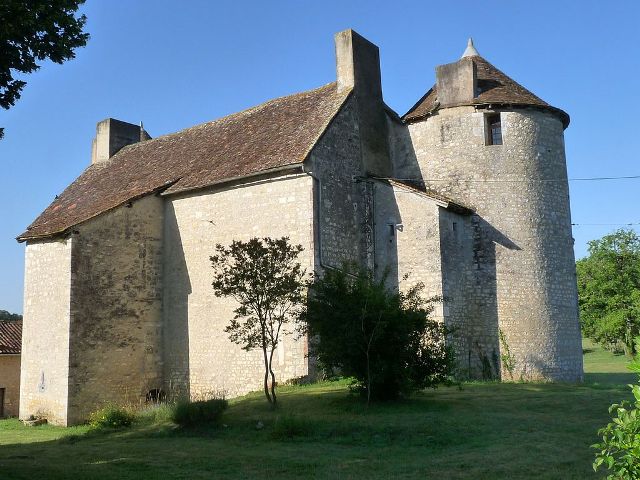 Location: Valence, in the Charente departement of France (Poitou-Charentes Region).
Built: 15th century.
Condition: In good condition.
Ownership / Access: Private property.
ISMH Reference Number: PA16000047
Notes: Château de Bourgon is located in the municipality of Valencia, Charente. In the fourteenth century, the stronghold of Bourgon belongs to the family of the same name. The daughter of Guillaume de Pierre Bourgon wife Barbezières, and the castle remains in that family until 1515 before passing by marriage to the family of Mastin. Jean Martin Bourgon acquired in 1674. In 1760, Francis Martin, Lord of Bourgon, buy tapestries from Bourg-Charente Castle. The architecture is typical of the fifteenth century, but voûtéeNote cellar, a mullioned bay and underbody accuse a previous construction of the thirteenth century. Formerly L, the main building is rectangular with two floors and includes two massive round towers to the northwest and southwest corners, with some loopholes. Two front building was added on the fronts east and north. A polygonal tower leveled containing a full staircase the building to the east. This tower has a door to the Gothic decor opening onto the courtyard. The staircase leads directly two rooms per floor. In the south, the chapel was built in the sixteenth century and has a beautiful vaulted dining ribs. It has a Renaissance door. The interior has a stone fireplace and a fifteenth-century wooden fireplace seventeenth century quite remarkable. In the eighteenth century, the castle was more important; it had extensive and long wing that encompassed the common northwest. At right angles to the east wing ended with a small round tower has entirely disappeared. The west facade has a porch with a monumental staircase. The castle is listed historic monument since 2011.