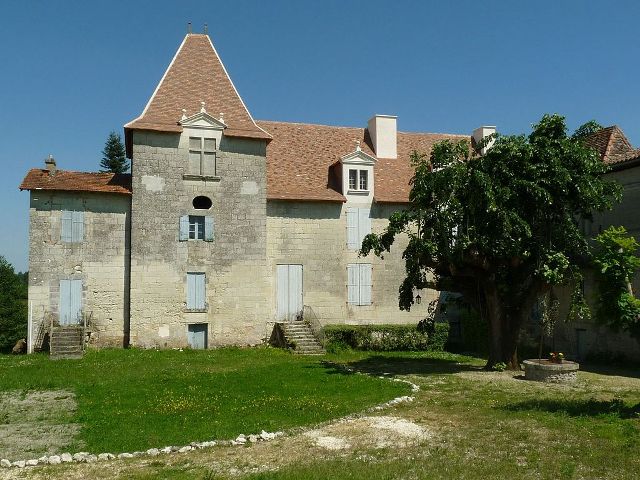 Location: Bonnes, in the Charente departement of France (Poitou-Charentes Region).
Built: 16th-17th century.
Condition: In good condition.
Ownership / Access: Privately owned.
ISMH Reference Number: PA00104252
Notes: Château de Bonnes is located on the Dronne on the Common Good in the department of (Charente) in France. The lordship of Happy fell Aubeterre and have belonged to Lambert in the twelfth century to the fourteenth century Laroche. Robert La Marthonie, Maitre d'hotel of Francis wife Jeanne Cablanzac which brings Good he will rebuild the castle in the early sixteenth century. Following litigation in 1659 the Castle of Good returns to Marie de Pompadour, Marchioness of Aubeterre. This castle was the residence of the lords of Aubeterre until sold in 1770 to Jean-Baptiste Perrier Gurat who dismembered and sold his land after 1802. It was partly registered historic monument April 10, 1974 for the Renaissance wing and 4 December 1995 for the two wings of the castle, excluding the portion built in the twentieth century. The Renaissance party consisted of two wings at right angles, three towers and a gatehouse. Then enlargements (extension of a wing) and embellishments were made in the seventeenth century. Castle Good that remains around the rectangular courtyard dwelling with attached the flag to cover a quadrangular pyramid and a wing perpendicular from the early sixteenth century. Another wing and a tower have disappeared.