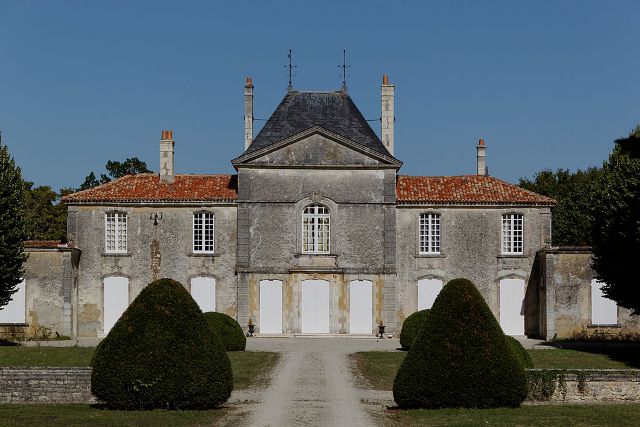 Location: Mazeray, in the Charente-Maritime departement of France (Poitou-Charentes Region).
Built: 16th-18th century.
Condition: In good condition.
Ownership / Access: Privately owned.
ISMH Reference Number: PA00104799
Notes: Château de Beaufief (which is locally pronounced Beauty) is a French castle in Mazeray in Charente-Maritime.This land belonged until 1633 to the ABILLON family aldermen of Saint Jean d'Angely, which Joachim was mayor in 1547, and his son John in 1582. As a result of marriage, inheritance and sales, the lordship fell in 1763 to Pierre Auguste Perrodeau, born in Saint Jean d'Angely in 1701 and who died in Mazeray in 1781. Descended from an old family of lawyers, it will become Prosecutor the election of the city and was elected mayor in 1765. Having added the name of Beaufief to his, and this aristocratic family name will be carried by his descendants, including his great grand son Joseph Edward (1821-1908), the creator in 1860 of the seaside resort of Ronce-les-Bains. Perraudeau fact dismantle the ruins of the ancient fortress of neighboring counts of Taillebourg in order to recover stones and to build in 1768 a new home, the iron railing wrought balconies still bears his figure. Originally, the gardens and the woods as an area of ​​600 hectares. At the end of the twentieth century, almost ruined house was acquired and restored by Count Jehan Marie Tower Geay (1913-1991) and his wife, née Jacqueline Collieaux (widow of Admiral Lions and in-laws mother of actor Bernard Dhéran), who had done the same from 1952 to Ecoyeux Castle, former home of the maternal family bard saintongeais Evariste Poitevin (1877-1952) said "Goulebenèze"; these rescues two saintongeais mansions were distinguished by the association Vieilles French Houses (Sazerac Cup) in 1973 and 1982 respectively. On 4 October 1973, the castle (facades and roofs), the staircase and wrought iron banister, the dining room and fireplace on the first floor living room and wood paneling, the chapel decorated with stucco were enrolled monument. In 1984, Beaufief restorers were also the prize "Masterpieces in Danger".