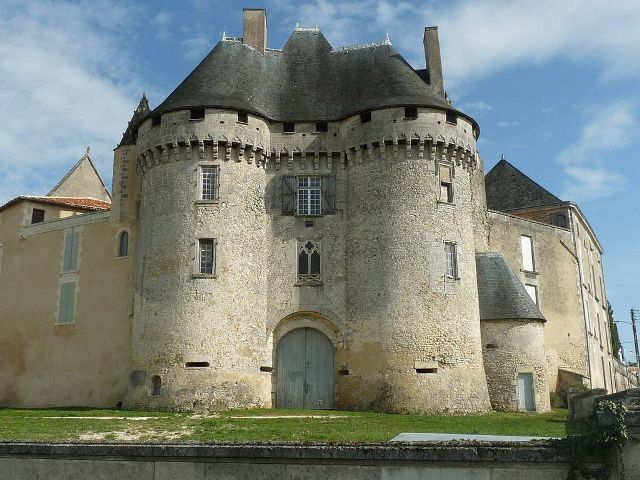 Location: Barbezieux-Saint-Hilaire, in the Charente departement of France (Poitou-Charentes Region).
Built: 15th century.
Condition: In good condition.
Ownership / Access: Owned by the town.
ISMH Reference Number: PA00104238
Notes: Château de Barbezieux is located in Barbezieux-Saint-Hilaire (Charente) and dates from 1480. Testimony by its massiveness and martial a rich history, but also changes in architectural history, and successive rearrangements made by the authorities who owned the castle from Barbezieux is the main monument of the city, he is the central point. If the current building is only the remains of a large complex, it remains the material sign of the importance What would the lordship of Barbezieux at the mercy of time, become one of the most powerful the region but also in hands that have contributed to writing the history of France. The powerful military fortress through the large fortified home, to finish as a local tourist attraction, is a rich history that book this great monument, and at multiple scales.A castle has existed on the site of the present castle from the eleventh century classical form of feudal mounds of the end of the Carolingian era and the beginning of the Central Middle Ages and rebuilt in the twelfth century stone; he was one of the largest in the region and was the power base of the first lords of Barbezieux, the feudal dynasty will continue until the Hundred Years War, rivaling even families Saintonge counts of Angoulême them- same on the background of course the rivalry between the Capetians and Plantagenets for control of Aquitaine. The castle at the head of a powerful lordship and recognized throughout the kingdom of France, was therefore at the heart of these rivalries; but the first building, many times tested in the wars of the Middle Ages, there remains today no trace, as well as the powerful feudal family of Barbezieux disappeared with him, bequeathing the estate to a branch relative by marriage, Duc de La Rochefoucauld, who, at the end of the hundred Years war, inherited a bruised area plagued by drought and morally proven.

How To Get To Château de Barbezieux (Map):