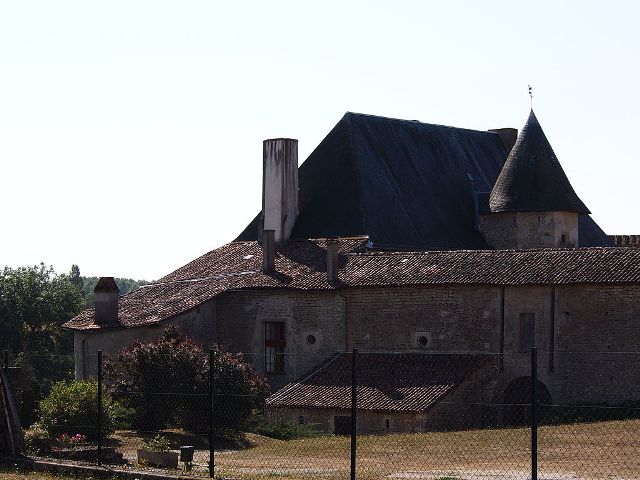 Location: Benest, in the Charente departement of France (Poitou-Charentes Region).
Built: 15th-17th century.
Condition: In good condition.
Ownership / Access: Private property.
ISMH Reference Number: PA00104552
Notes: Château d'Ordières is located in the town of Benest, in Charente, in the northern department belonging to the province of Poitou. In the fourteenth century the stronghold of Ordieres, already belonged to the family of La Rochefoucauld and the keep dates from this time. The oldest document reports that in 1486 Peter FONTLEBON tribute to Ordieres the Count de La Rochefoucauld. Geoffroy Pastoureau became lord of Ordieres in 1530. Its indirect descendant Pastoureau Abel built the central building and sculpt the arms in 1617. Her daughter brings Ordieres Peter to Monéïs, and Monéïs family will keep the castle until the Revolution. Sold as national property Ordieres is bought by Jean-Baptiste Grellier, usher in Confolens. It was partly registered historic building on 13 April 1989, the southeast is a former dungeon tower, the buildings consist north corner towers and the central building. On the banks of the Charente, Ordieres was surrounded by two defensive pregnant. The outer wall consisted of dependencies and fled. To access the court, the second enclosure goes through a door that had a portcullis breakthrough in a building between two round towers with loopholes. The court has a keep nine meters in diameter and walls two meters thick crowned with battlements. The ground floor, with no opening is circular and vaulted dome as the parts of the three floors are square connected by a spiral staircase which also overlooks a gatehouse for latrines. It may date from the fourteenth century and earlier than the house with which it communicates by a flying bridge at the second floor. The home mullioned windows is centered by a polygonal staircase tower is topped by a gatehouse. His door is topped with a remarkable sculpture of arms of Pastoureau supported by griffins.