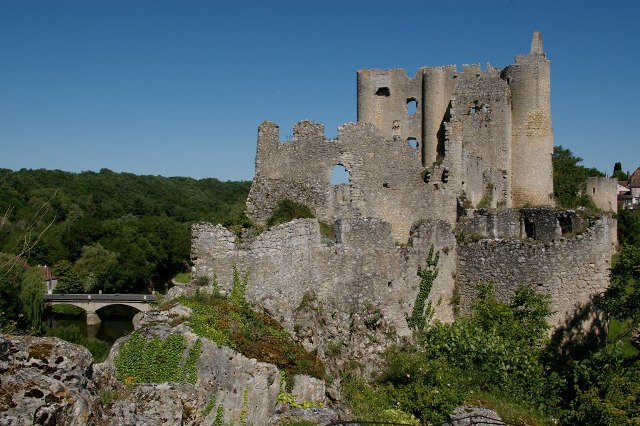 Location: Angles-sur-l'Anglin, in the Vienne departement of France (Poitou-Charentes Region).
Built: 13th century.
Condition: In good condition.
Ownership / Access: Owned by the town.
ISMH Reference Number: PA00105324
Notes: Château d'Angles-sur-l'Anglin is a castle located in Angles-sur-l'Anglin in Vienna. Castle of Angles-sur-l'Anglin monitors the border of Poitou since the tenth century (it is attested in 1025). It is purchased by Bishop William of Bruges to the family of Lezay in the late thirteenth century and will remain property of the bishopric until the Revolution. Guichard III, lord of Angles was appointed seneschal of Saintonge during the Hundred Years War and was appointed marshal of Guyenne when the Poitou becomes English in 1356. The Castle of Angles-sur-l'Anglin is taken to the British without a fight by the constable in 1372. In the fifteenth century the bishops perform important work. Hugues de Comparel built the new castle and William Charpagne successor continues the work. Then, during the troubled times that are the sixteenth and seventeenth century, the castle was taken by the Protestants, and by the Leaguers, by royal and slingers. Then it was abandoned by the bishops. Became public career in the revolution, it was bought in 1923 by the Western antique Society and by the town in 1986. It was listed building on February 10, 1926. The castle is a public building.