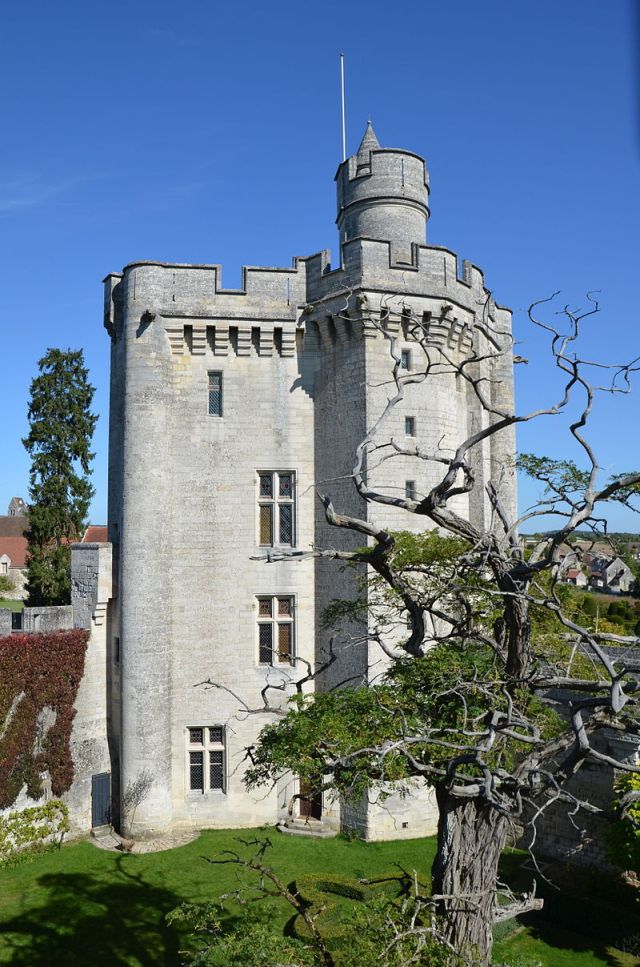 Location: Vez, in the Oise departement of France (Picardie Region).
Built: 13th-14th century.
Condition: In good condition.
Ownership / Access: Private property.
ISMH Reference Number: PA00114952
Notes: Donjon de Vez is the name usually given to the castle of Vez, a strong French fourteenth-century castle located Vez in the department of Oise. The actual tower was built between 1390 and 1410 by Jean de Vez and probably his brother-Robert St. Clair, itself having remained childless. It never belonged to Louis of Orleans or to a family member, but Jean de Vez was his chamberlain and obviously uses an architect of the royal or ducal entourage, likely John Lenoir. The pentagonal dungeon has four floors of living space, and its only defensive elements are its battlements along the summit terrace. It is on the edge of a vast fortified enclosure, contemporary party, posterior, and built on older foundations. At its center are a chapel of the same time as the castle and the ruins of the house of the years 1360 / 1390. Nothing recalls the first castle started probably at the end of the thirteenth century, and burned in the Great Jacquerie in 1358. - When the entrepreneur and expert geologist Léon Dru bought the castle in 1890, it was partially ruined. He began his restoration and leads the very dramatically influenced by Eugène Viollet-le-Duc, and died in 1904. In that year, the castle is classified as historical monuments by order of 13 June1. Most recently in the late twentieth century, its owners have restored the castle again, and it serves from frame to contemporary artistic works: sculptures, paintings and stained glass.For very free interpretation of the etymology of the name Vez, which is wrongly equated with Valois, historians of the sixteenth to the eighteenth century, including Claude Carlier, Vez make the capital of a Carolingian principality drawing its origins in a camp Roman, but no archaeological indication and no source support these allegations. Vez belongs to Crépy-en-Valois counts since immémorables time, then passes into the royal domain when Philippe Auguste annexed the Valois in 1185. Then to reward his comrade Raoul Estrées for his merits in the battle of Bovines , the king gives his entire domain Vez, including the mill, in fief. The deed of gift making no mention of a castle or a fortified house, it can be considered almost certain that the fortress does not exist yet. Raoul Estrées or one of its descendants are building a castle, which belongs to Hector de Vez, his distant descendant, in 1358. According to the description provided by his son Jean in 1358, following the devastation of the place under the great Jacquerie late May / early June 1358, the castle had to be generously sized and equipped with all amenities. But the fire of the castle causes such damage that the only solution seems the total leveling of the remains and the full reconstruction.

How To Get To Donjon de Vez (Map):