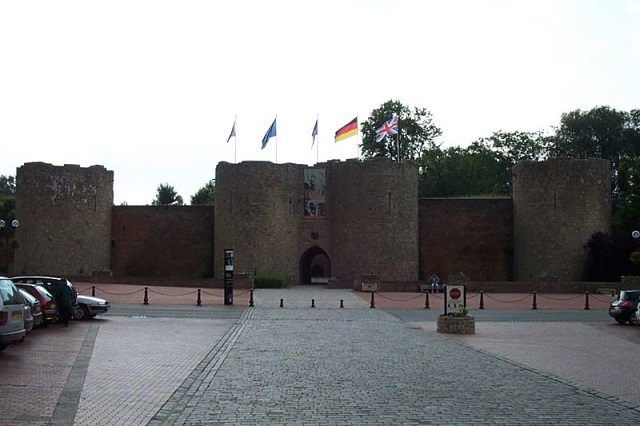 Location: Péronne, in the Somme departement of France (Picardie Region).
Built: 1421.
Condition: --.
Ownership / Access: Department of the Somme.
Notes: The Château de Péronne is a medieval castle located in the town of Péronne, in the eastern department of the Somme.In the Merovingian period there existed in Péronne a royal residence where Radegonde de Poitiers lived in the sixth century. In the following century, Erchinoald, the mayor of the palace of Neustria, welcomed Fursy de Péronne. In 884, the royal residence was set on fire by the Vikings. The Count de Vermandois subsequently built the castle and fortifications of the town. It was in the castle that King Charles the Simple was kept prisoner from 923 to 929 by Herbert II of Vermandois. It was at the beginning of the thirteenth century that the castle, once again a royal residence, assumed its present appearance. King Philippe Auguste built a typical castle of Philippine architecture with four sandstone towers connected by brick walls lined with ditches and an entrance gate with drawbridge and harrow. A dungeon was located in the western part of the castle; It was destroyed in the seat of Péronne in 1536. It was in this castle that King Louis XI was kept prisoner by Charles the Bold, Duke of Burgundy in October 1468. The fortress was transformed in the seventeenth century in order to resist the attacks of the artillery. Until 1914, the castle maintained a military activity of shops and armory. The towers were damaged during the Battle of the Somme. In 1924, three towers and curtain walls connecting them are classified historical monument. Since 1992, the castle houses the entrance to the Historial of the Great War.

How To Get To Château-fort de Péronne (Map):