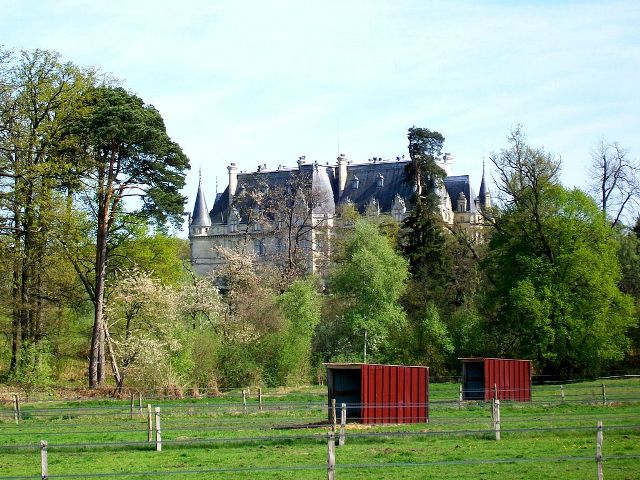 Location: Mortefontaine, in the Oise departement of France (Picardie Region).
Built: 1894.
Condition: In good condition.
Ownership / Access: Owned by a private company.
ISMH Reference Number: PA00114762
Notes: Château de Vallière is a French castle of the nineteenth century located in the town of Mortefontaine in the department of Oise and Nord-Pas-de-Calais and Picardy region. The park lies partly in the municipality of Fontaine-Chaalis. Built in 1894 in neo-Gothic style for the Duke of Gramont; its facades and roofs are listed on the inventory of historical monuments by order of 29 October 1975. The park is a listed site since April 10, 1961 on the border of the forest of Ermenonville.Castle Valliere was built in 1894 for Agenor de Gramont (1851-1925), Duke of Gramont, and the Duchess was born Marguerite de Rothschild in the Grand Park vast area of ​​Mortefontaine and Montmélian, which had belonged to Joseph Bonaparte of 20 October 1798 until 1814, when he went into exile. It was Joseph Bonaparte who just made complete the large park between 1808 and 1814; until then, the Little Park prevailed, which is not part of the domain Valliere. Bonaparte bequeathed the estate of Mortefontaine its director, Madame de Villeneuve, a fictitious sale. She rents the field largely to the Prussian Baron Georg von Schickler Arthur, who wanted to become the purchaser. In 1829, Henri de Bourbon, Prince de Conde last and already owner of Château de Chantilly bought the estate. After his death, his mistress Sophie Dawes, Baroness Feuchères receives the domain as a gift in 1837. Only three years later, his goddaughter Sophie Thanaron inherited the estate after the death of the Baroness. She marries the Prefect of the Aisne Henry Corbin († 1879). January 6, 1892, the Corbin family decided to sell the 1500 ha of land for the future domain Valliere which represents most of the field and Mortefontaine Montmélian to Agenor Duke of Gramont (1851-1925). But she keeps Mortefontaine Castle and the woods on the hill of Montmélian. She died in 1901, and the castle of Mortefontaine with the Little Park will remain the property of his children until 1928. At Valliere, Duke organizes hunts pheasant, duck or deer while the Duchess represented parts by Eugene Labiche or tableaux. A bus service is established by the Duke between the station and the castle, with sixteen gray horses harnessed by five and led by postilions wearing a top hat. From the terrace of Valliere, Marcel Proust, came to attend on 14 July 1904, the engagement of Armand de Gramont with Elaine Greffulhe, see, over the ponds and foliage, the towers of the Cathedral of Senlis. After the death of his father in 1925, Armand de Gramont became the 12th Duke of Gramont. Henry succeeded him as Armand 13th Duke in 1962, and twenty years later, he sold the most emblematic of the area. Since 1982, the castle of Valliere and the Grand Park are no longer in the family Gramont.

How To Get To Château de Vallière (Map):