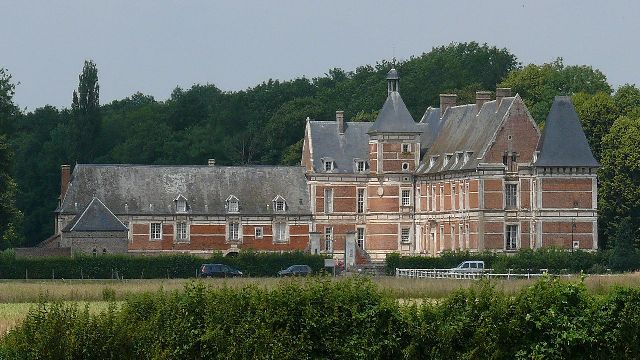 Location: Troissereux, in the Oise departement of France (Picardie Region).
Built: 15th-18th century.
Condition: In good condition.
Ownership / Access: Private property.
ISMH Reference Number: PA00114931
Notes: Château de Troissereux is a Renaissance castle in the municipality of Troissereux in Oise. It was built primarily in the fifteenth and sixteenth centuries. The building benefits from a first classification as historical monuments since 1983. It is open to the public.The various components of the castle and its domain were successively listed or registered historical monuments. The first protection order of 25 February 1983 provides a ranking of its portal, its facades and roofs, its courtyard, moat and waterways. It also provides a listing of the grand staircase and spiral staircase in the tower, as well as the large living and dining room with their decor on the ground floor. Then the park with all its elements is both classified (1983) and registered by Decree of 10 April 1992. Finally, various elements of the old not yet classified area are listed by order of 23 September 2003, including the many hydraulic systems, channel blocked both third parties and bodies of water that are not yet classified.

How To Get To Château de Troissereux (Map):