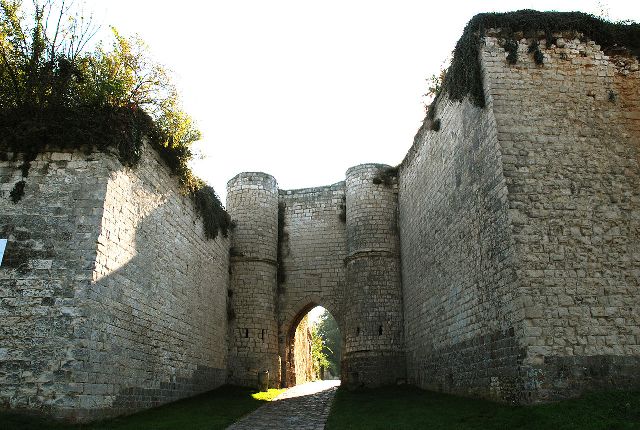 Location: Picquigny, in the Somme departement of France (Picardie Region).
Built: 613.
Condition: In good condition.
Ownership / Access: Owned by a private company.
ISMH Reference Number: PA00116217
Notes: Château de Picquigny dates from 613, it is located in the municipality of Picquigny near and west of Amiens in the Somme. In 1115, the lord of Amiens, Adam, was imprisoned in the castle of Picquigny. In 1307, on the orders of Philip IV, King of France, Renaud Picquigny ordered the arrest and imprison the Knights Templar of the bailiwick of Amiens to the castle. At the beginning of the Hundred Years War, Edward III of England could not cross the Somme at Picquigny in 1346. In 1398, the lordship of Picquigny passed Baudoin d'Ailly and remained in that family until 1681. The castle was burned in 1470 by Charles the Bold. It was rebuilt and modified in the Renaissance. June 7, 1493, King Charles VIII spent a night at the castle on his return from a pilgrimage to Our Lady of Boulogne. In 1553, the army of Charles V burned the town of Picquigny. In April 1597, Henry IV stayed at the castle before visiting the headquarters of Amiens taken by the Spanish. In 1636, Richelieu spent a night at the castle by going to inspect the fortifications of Abbeville. In 1681, the lordship of Picquigny passed to the family of Honoré d'Albert (1581-1649), Duke of Chaulnes and remained in that family until 1774. In 1689, Madame de Sevigne spent four days at the castle. She recounted her stay in a letter dated 27 April 1689. On the death of Louis Albert de Luynes, the lordship of Picquigny passed after many vicissitudes the Comte d'Artois, the future Charles X in 1779. During the Revolution, land and castle declared National Property were sold in District of Amiens on 27, 28, 29 Nivose, year III. Abandoned, the castle fell into ruin and passed to various owners. In 1912, the owner, the Countess Aymar de La Rochefoucauld (née Morgan Belloy) bequeathed by will Picquigny Castle in Picardy of antique Society who sold to a private owner in 2013.

How To Get To Château de Picquigny (Map):