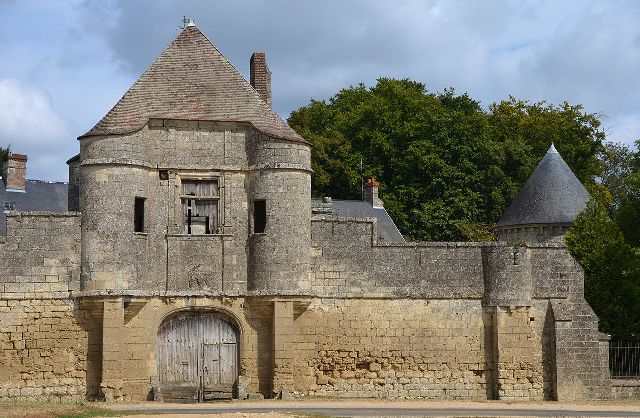 Location: Villers-Cotterêts, in the Aisne departement of France (Picardie Region).
Built: 13th century.
Condition: In good condition.
Ownership / Access: Privately owned.
ISMH Reference Number: PA00115985
Notes: Château de Noüe is located in the municipality of Villers-Cotterets in the Aisne department in Nord-Pas-de-Calais and Picardy.The first known castle at a place called La Noue or Noüe have been built in the late tenth or early eleventh century in the village of Pisseleux, in the municipality of Villers-Cotterets. He was replaced by another castle built in the thirteenth century and in the fifteenth and sixteenth century which are still visible the enclosure, the dungeon, the dovecote and the turret on the front of the main building. The main building and outbuildings were remodeled in the nineteenth century. The imposing dovecote Length certify that the castle was a high-vigilante lord. The land was owned by the Noüe family Noüe since the eleventh century. Benefactress of the monastery of Bourgfontaine and priories and Collinances Longpré in Valois, the family won in 1156 Ancoul of Pierrefonds, bishop of Soissons the right to build a chapel dedicated to Saint Jacques. Pierre II Noüe was forced to sell the land and lordship of Noüe to 1539 to King Francis I, who installed Anne d'Heilly Pisseleu, duchess, his mistress. May 13, 1642, Robert III Noüe Noüe sold the farm to religious ladies of Soissons. After the family of Anne and Noüe Pisseleu is known as the castle in 1672, was owned by Denis Leroy, knight Acquet. In 1793, it was Louis Foucault, its then owner makes screed towers and burned the archives of the castle. In 1848, the castle was the residence of the Arab leader Mohamed Ben Abdallah, said Bou-Maza, who after visiting the French during the conquest of Algeria was under house arrest at Villers-Cotterets. Before 1914, an American name Henderson is the owner. In 1957 he became the property of Pauline André-Lécroart, a family from northern France. His son Charles André there creates Valois Nurseries operating at Villers-Cotterets orchards, including experimental. Charles André was named Best Fruit Grower of the Year in 1989 by the Dwarf Fruit Tree Association (USA). The castle is registered with the additional inventory of historic monuments: the "dungeon" and the oldest part of the enclosure by ministerial decree of 1927 and the whole castle facades and roofs, dovecote, chapel and all of the enclosure and discounts by order of the prefect of the Picardy region of 5 July 2004.