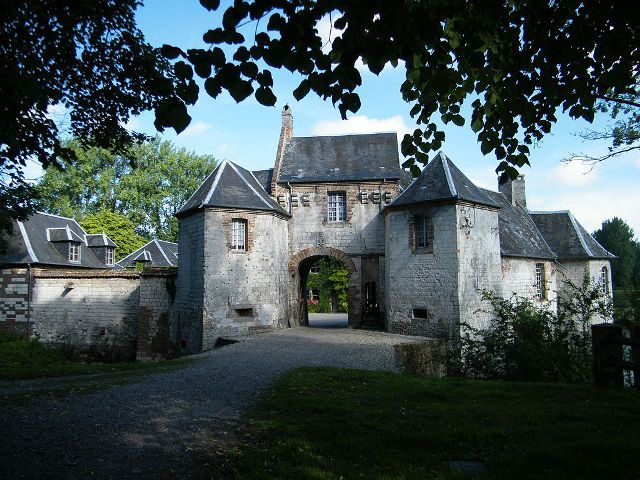 Location: Nampont, in the Somme departement of France (Picardie Region).
Built: 15th century.
Condition: In good condition.
Ownership / Access: Privately owned.
Notes: Château de Nampont or strong house Nampont Nampont is located in the municipality of Nampont in the department of the Somme.The stronghold of Nampont is quoted as 858. The families of Nampont, Bernâtre Quesnoy in 1335 and in 1377, will be the occupants. Francis I and the members of parliament gathered in the castle in 1517 to ratify the Concordat of Bologna. Adrien Vaudricourt then owner.The moat, fed by sources, protect the polygonal building of the fifteenth century. The entrance as a postern keeps track of the drawbridge that once allowed access. Once provided with a walkway which only a few elements remain, defensive walls have many loopholes in hard stone. A well crafted remains in a corner of the courtyard. In the seventeenth century and the eighteenth century, work will complement the set that will include post perception for the salt tax. Contemporary restorations will aim in particular to repair the damage of World War II.