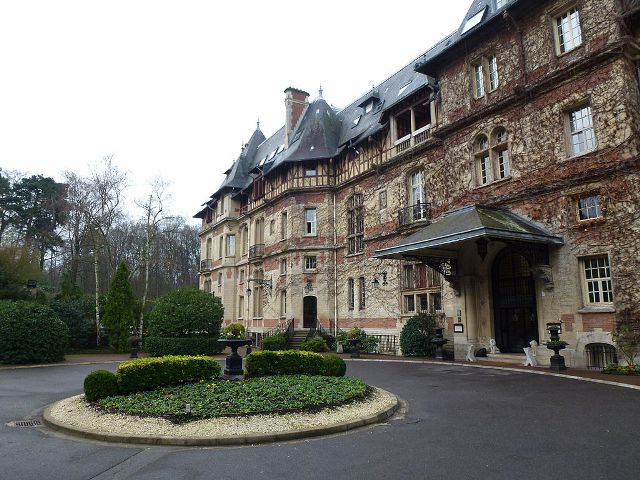 Location: Gouvieux, in the Oise departement of France (Picardie Region).
Built: --
Condition: In good condition.
Ownership / Access: Now a luxury hotel.
Notes: Château de Montvillargenne is located in Gouvieux near Chantilly, in Oise.In 1911, Jeanne de Rothschild (Paris, 1874 - Paris, 1929), daughter of Edward James de Rothschild (1844-1881) and Thérèse Laure Rothschild (1847-1931), sister of Henri de Rothschild and wife of baron Leonino ( 1867 - Milan, 1911), Italian banker, built a castle in a town where the so-called London branch of the Rothschild family already owns the castle of Fontaines. On the death of Jeanne, the castle was abandoned for ten years. It is occupied by the Germans during World War II. After the war, a novitiate operated by the Sisters of the Sacred Heart of Jesus moved into the building. It is replaced by a vocational school of arts in 1969. In 1985, the castle was transformed into a luxury hotel that gets its fourth star in 2003. He appealed to Leon Maurice-Chatenay, architect of the family who had made 1902-1905 ophthalmological foundation Adolphe de Rothschild in the 19th arrondissement of Paris. The construction lasts three years. The building, high on the tray flange, is eclectic, including neo-timbered Norman. The current facility has 120 rooms, a restaurant, heated indoor pool, steam room and sauna.

How To Get To Château de Montvillargenne (Map):