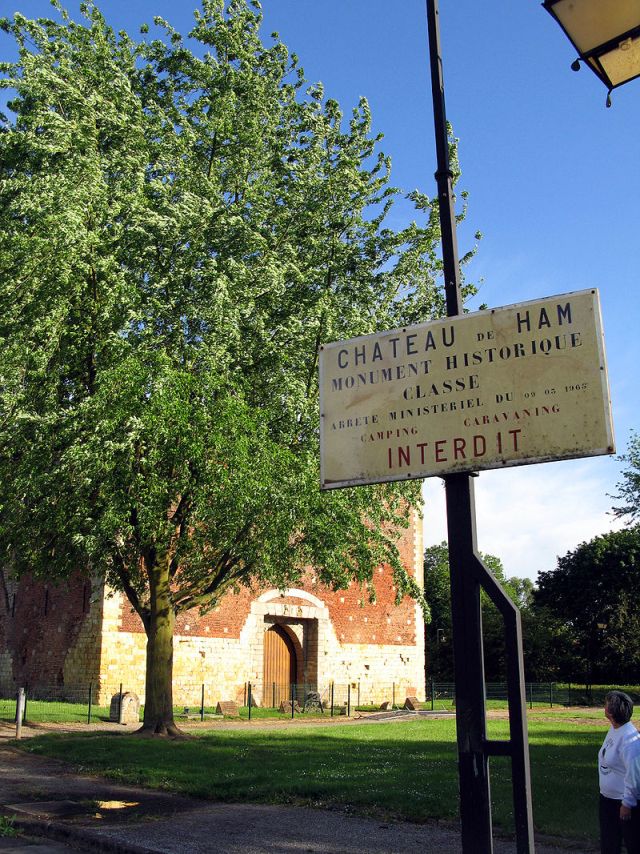 Location: Ham, in the Somme departement of France (Picardie Region).
Built: 11th century.
Condition: In good condition.
Ownership / Access: Owned by the municipality.
ISMH Reference Number: PA00116172
Notes: Château de Ham or fortress Ham is a castle located in Ham (Somme) in Nord-Pas-de-Calais and Picardy.Ignoring the creation date of the original castle, historians agree that it was erected by the first Counts of Vermandois to 1052. It was restored by Odon IV in the thirteenth century and in the fifteenth century by John II of Luxembourg, Count of Ligny. The latter's nephew, Prince Louis of Luxembourg St. Pol, better known as the Constable name of Saint-Pol, Count of Saint-Pol and Constable of Louis XI in 1465, built in 1441 a monumental tower, the great tower or "turn the constable." Ham's castle was besieged several times, particularly by Philip II of Spain in 1557. Attached to the crown of France under the reign of Henri IV, it is subject to transformations in the late seventeenth century by Vauban. It is then converted into a state prison. It hosts famous prisoners was the last of the Prince Louis Napoleon Bonaparte (later Napoleon III) who stayed six years (1840-1846), and finally escape disguised as a mason, under the Badinguet identity. In 1870, the second Northern army surrounded the city occupied by the Prussians and forces them to sign a capitulation. Like the castle of Coucy, the fort was blown up by the Germans on 19 March 1917. It remains today the beautiful building as picturesque ruins overlooking the peaceful course of the Somme canal. Ham Castle remains are included in the inventory of historical monuments since 19652. In 1977 an association "Friends of the Castle of Ham" is created to safeguard and enhance the remains of the Fort. It attempts since then to revive the site works, exhibitions, shows ... On 11 October 1980 the association Friends of Napoleon III affixed a plaque on the castle entrance tower engraved with the inscription: "In these places, Louis Napoleon Bonaparte imprisoned from 1840 to 1846 designed his policy economic and social progress.

How To Get To Château de Ham (Map):