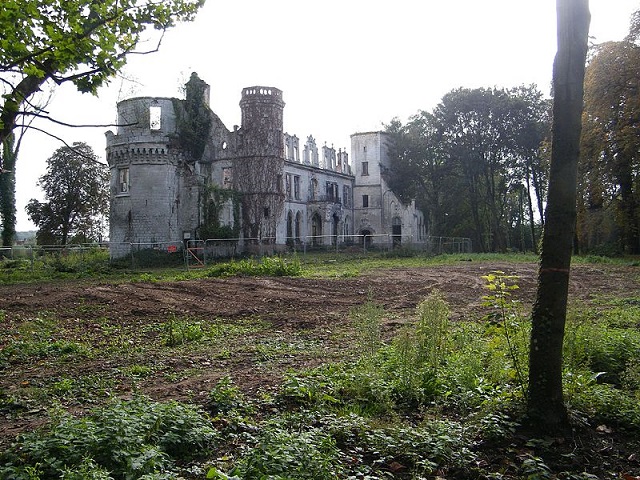 Location: Pont-Remy, in the Somme departement of France (Picardie Region).
Built: 1421.
Condition: Ruin.
Ownership / Access: Town of Pont-Remy.
Notes: The castle of Pont-Rémy is an old castle of the 15th century, transformed in the nineteenth century in private residence. It is now reduced to a state of ruin.From the Early Middle Ages, a fortress defended the passage of the Somme at this place. The castle played a not insignificant role during the Hundred Years War: Edward III was held in check in 1346 before the Battle of Crécy. Under Charles V, the English, who were driven out of Abbeville, found refuge there, but they were expelled by Guy de Luxembourg-Saint-Pol. In 1415, before the Battle of Azincourt, it was King Henry V of England who failed in the face of the resistance of Louis de Waucourt. In 1416, the Emperor of the Holy Roman Empire Sigismund stayed there. However, the Duke of Burgundy, Philip the Good, succeeded in seizing it. The castle was rebuilt after 1421 and retained its role as a fortress during the Wars of Religion. In the 16th century, Queen Eleanor and the dauphin settled there in 1531, Henry II in 1549. Marie Stuart made her last stop in France in 1561 and Henri IV passed there in 1594. In the seventeenth century, Richelieu slept there in 1638 but The fire having taken from the powder magazine of the garrison, he had to flee by night on a boat. During the Spanish invasions, the house was set on fire and the castle lost its role as a stronghold after the Peace of the Pyrenees of 1659. It was at the beginning of the XIXth century that the castle was rebuilt in Neo-Gothic style by the Count of Maisniel de Liercourt. Victor Hugo made a drawing of it in 1837. In 1955, the castle, which belonged to the Comtesse de Coux, was sold and then sold to owners who left it abandoned. The castle is protected under historical monuments: registration by decree of January 8, 1993 On the night of August 13-14, 2012, a fire a criminal fire destroyed the roofs, stairs and floors. The commune of Pont-Remy bought the estate in 2015.