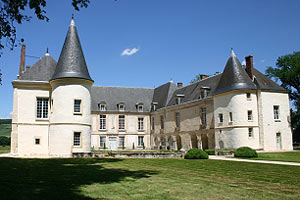 Location: Condé-en-Brie, in the Aisne departement of France (Picardie Region).
Built: 12th century.
Condition: In good condition.
Ownership / Access: Privately owned.
ISMH Reference Number: PA00115608
Notes: Château de Condé is a private area inhabited all year located in Condé-en-Brie (Aisne), on the Champagne route, 100 km east of Paris. Condé Castle is the subject of a classification as historical monuments since October 18, 1979 At the request of Bourbon, Princes of Savoie and then the Marquis de La Faye, the most prestigious artists such as Watteau and Lancret students, or Pater Bonaventure de Bar, Boucher and Oudry realized its sumptuous decorations of the seventeenth and eighteenth centuries. This château evokes part of France's history through illustrious figures such as Conde, the Savoy, La Fontaine or Richelieu, not forgetting Olympe and 'powder' mysterious. The Watteau wing and its recently discovered frescoes, Richelieu room, private apartments and exceptional room decorated by Oudry are the star attractions of the castle.The proximity of the confluence of the Dhuis and Surmelin, a tributary of the Marne will give its name to the village of Condé-en-Brie. Indeed the root of the word comes from Condé original place name Gallic Condate meaning etymologically "confluence". Inhabited since ancient times, this place served as a theater 500 for a battle between the Senones to Condrusi. Important relics of that era remain in the foundations of the castle. These are probably those of a Gallo-Roman villa. Blessed John of Montmirail was the first lord of Condé. It was then that a noble fief having high and low justice and authorization gallows. His son-Enguerrand III built the first castle in 1200 worthy of the name. The walls two meters thick and wide archers testify to this period. Marie de Coucy, last of the line, brings in 1400 with her husband, the Count of Bar, the Condé land which then pass, always by the play of alliances, the House of Luxembourg. In 1487, the House of Bourbon comes into possession of the manor by marriage to Marie de Luxembourg with François de Bourbon, Count of Vendome. This then goes to one of his son, Louis said the cardinal of Bourbon-Vendôme, abbot of Saint-Denis, Archbishop of Sens, Bishop of Laon and Luzon. This transforms the castle of Coucy in a great appointment Renaissance hunting with the current building no longer represents about two-thirds of the initial surface. His arms surmounted by a cardinal's hat, still figure on the pediment of a door and a fireplace.

How To Get To Château de Condé (Map):