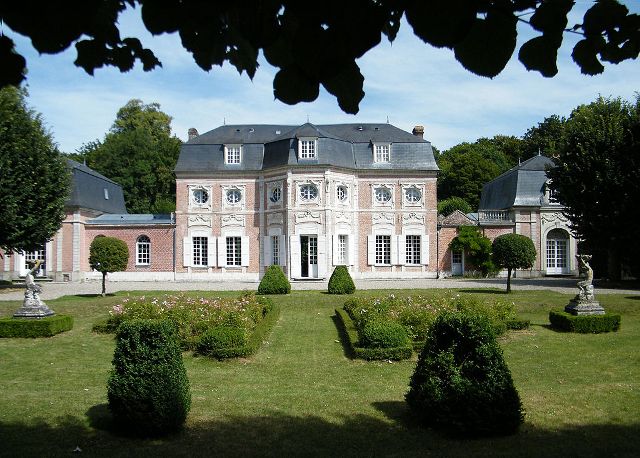 Location: Abbeville, in the Somme departement of France (Picardie Region).
Built: 18th century.
Condition: In good condition.
Ownership / Access: Privately owned.
Notes: Château de Bagatelle is a castle of the eighteenth century located in Abbeville, Somme.The house is built on bare land in the suburb of Saint-Gilles, acquired in 1752 by Abraham Van Robais (from 1698 to 1779 - his portrait by Jean-Baptiste Perronneau, 1769, is in the Louvre), youngest son of Isaac van Robais († 1703) and heir of his uncle Josse, said Ryxdorpen, then in 1735. with great ways, it replaces Leroy former hotel Valine to Abbeville by another remains. End 1665, his grandfather Josse - then Joseph - Van Robais († 1694), clothier and merchant of Middelburg, was attracted by Jean-Baptiste Colbert, superintendent of royal buildings and factories since 1664, which wants to revive the textile industry local. To do this, he is a French citizen, licensed to practice Protestant religion, exempt from taxes and duties, gets a "bonus" of 12,000 pounds and linen manufacturing monopoly for twenty years to create the manufacture of Rames (referring to rows of oars used for drying sheets). It was originally a small pavilion called in ground garden four parts, a "trifle" or "pleasure palace" according to the architectural treatises of Jacques-François Blondel (1737) and Charles Étienne Briseux (1743), used to receive important guests of the industrial and who, for that reason, had only winter lounge, summer lounge and dining room, but no rooms ex officio or amenities pieces. The brick building which has no foundation or basement, has a flat roof called "deck" or "Italian" (such as the Palace of Versailles and Trianons). She is willing "lantern", the parts being informed on each side to let in the most light possible. In 1763, in order to create a floor of rooms, is added to the elevation level or attic, "the top floor of a facade that has half or more than two thirds of the height of the floor lower, "according to Jules Adeline (p. 35 of the 1889 edition of his Dictionary of terms of art). In 1793 the Van Robais, whose privilege was not renewed in 1768, sold the castle to Pierre-François Roze (officer of the Royal Navy?), Then in 1802 the family workshops to Michael Grandin, manufacturing of Elbeuf.In 1810, Bagatelle is sold to François-Gabriel de Wailly, whose heirs will add fills says "Mansard" and then, in 1898, two side pavilions by architect Parent. In 1878, the farm became dilapidated, was replaced by two wings. Since the exterior of the house has not changed. These important transformations and expansions of "madness" of the second half of the eighteenth century, changing its original appearance, evoke - and more harmonious - those that undergoes a century later the most famous "Bagatelle" world, the wood of the Boulogne in Paris, among others heavily raised by the 4th Marquess of Hertford († 1870), then by his heir Richard wallace († 1890). The de Wailly retain Bagatelle for nearly two centuries before selling to the current owners who have undertaken a restoration campaign interiors and garden. Located in the south of the city, near the road to Paris (between the Faubourg Saint-Gilles and the road from Amiens), it also has a botanical park of 10 hectares. The house was included in the supplementary inventory of historical monuments May 18, 1926 and November 26, 1946, the formal garden, French garden and the park.

How To Get To Château de Bagatelle (Map):