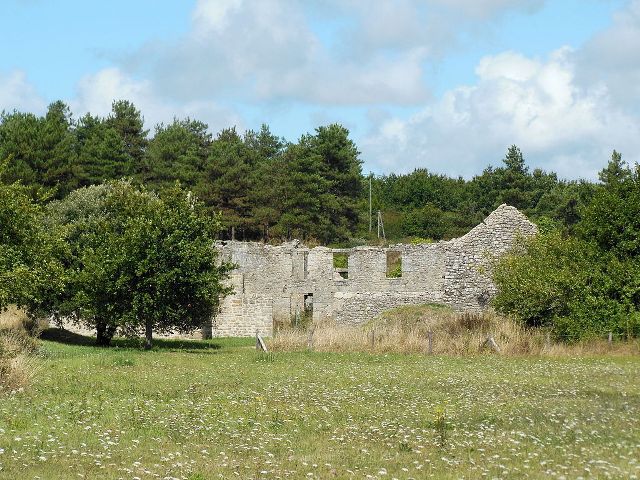 Location: Guérande, in the Loire-Atlantique departement of France (Pays de la Loire Region).
Built: 15th century.
Condition: Ruined.
Ownership / Access: Conseil départemental de la Loire-Atlantique.
Notes: Manoir de Kersalio is a former noble residence which is located south of the village of Clis, in the municipality of Guérande, in the French department of Loire-Atlantique. The construction time of Kersalio mansion is not confirmed, the absence of clear written sources. The lordship is nevertheless in the middle of the thirteenth century. The main building, built in granite on a plane L, when about him probably the first half of the fifteenth century. The first lords of Kersalio are family Le Guennec. Jehan Le Guennec, chamberlain and equerry to the Duke of Brittany in 1420, lives Kersalio the early fifteenth century. In the early seventeenth century, the manor passed successively into the hands of the Leroy family, then the family Foucquer, which remains the owner until the French Revolution. In the nineteenth century, the building is decommissioned in farming. The mill Trévaly, mentioned in 1650, depends on the Kersalio mansion. In 1926, the arched gate was removed and assistant on the west facade Castle Trévaly in La Turballe. The mansion is damaged by fire in 1976. In the state of ruins, it is today the property of the County Council of Loire-Atlantique.