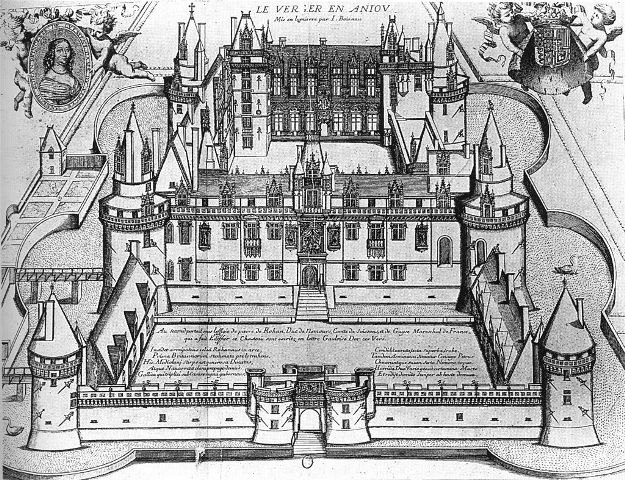 Location: Seiches-sur-le-Loir, in the Maine-et-Loire departement of France (Pays de la Loire Region).
Built: 16th century.
Condition: In good condition.
Ownership / Access: Private property.
ISMH Reference Number: PA49000031
Notes: Château du Verger de Seiches-sur-le-Loir is an ancient castle dismantled, located in Seiches-sur-le-Loir, Maine-et-Loire, France. It was built during the second half of the fifteenth century and first half of the sixteenth century by Pierre de Rohan-Gie, Marshal of France, and the architect Colin Biart. The domain and the castle were built for Marshal Gie on his return from Italy. After 1504, the marshal neglects its other areas to beautify the Orchard. This is where was signed the Treaty of the Orchard stipulating that the heir to the Duchy of Brittany can not marry without the consent of the King of France. From 1776 to 1783 the castle was dismantled by Cardinal de Rohan. It remains today the grip of the old castle and its forecourt (ie the remains of the castle itself, the facades and roofs of buildings in the forecourt, the plate lands there match, the moat and walls of the moat counterscarp). The walls of the park fence with, in particular, teams which rely in it; the convent grounds plate (former priory) and the facades and roofs of the old house prioral and sixteenth-century building.

How To Get To Château du Verger de Seiches-sur-le-Loir (Map):