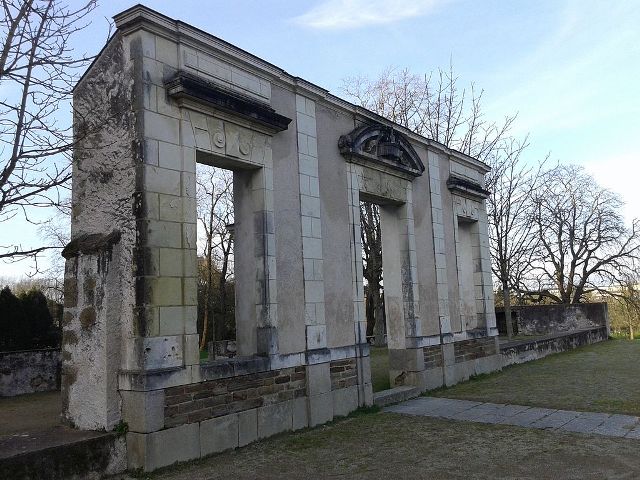 Location: Guérande, in the Loire-Atlantique departement of France (Pays de la Loire Region).
Built: 19th century.
Condition: Ruins.
Ownership / Access: Private property.
Notes: Château des Dervallières was a noble residence now almost entirely disappeared, near Nantes in the neighborhood Dervallières - Zola. In the fifteenth century the lordship of Dervallières is owned by the family of Derval, a branch of the house of Dinan-Laval. The Derval have a home in the center of Nantes, the manor of Derval, today integrated in the buildings of the town hall, and a country residence, Dervallières, they will be responsible for construction. The fief, provided the high court law extends the Contrie the lordships of Garoterie (St. Herblain) and Carcouet (in Chantenay). In 1494, Francoise de Dinan, Countess of Laval, acquired the estate which she then gives to Jean François de Cardona, Receiver General of Finance of the Duchy of Brittany, who died in 1539. He was succeeded Joachim Tissart, husband of Anne of Cardona in 1540, and François d'Argy in 1557. in 1573, it was Claude Argy, wife of René du Breil, Lord of Liré, ordinary gentleman of the king, who is the lady Dervallières1 and hotel owner of Derval . In 1578, the properties are resold. The Lordship of Dervallières passes Georges Morin, Mr. Hat, treasurer of Britain, and Claude Morin, wife of Charles de Maille, then, in 1600, Urban Maille, wife of Jean-François Bonnin. Then there is the marriage of the hands of the Bonnin Messignac, Lord of Chalucet (in 1678, Charles Bonnin Messignac), which give way in 1699 to Louis Daussain. In 1701, John I Stapleton, rich Irish Nantes, owner of large estates on the island of Santo Domingo on buys for the price of 64 000 pounds and bigger, his son Jean Stapleton II (1696-1776) , the husband of Anne O'Shiell. In the 1820s, next to the castle of Dervallières, the Guillet family of Brush built a new noble house in tufa. The property comprises numerous outbuildings, stables, greenhouses, gardens and woods. In the 1950s and 1960s, a public housing complex is built on the site of Dervallières. The castle of the nineteenth century was destroyed in the 1980s by the former estate, today still part of the park, the pigeon, the pool and the facade of the central pavilion.