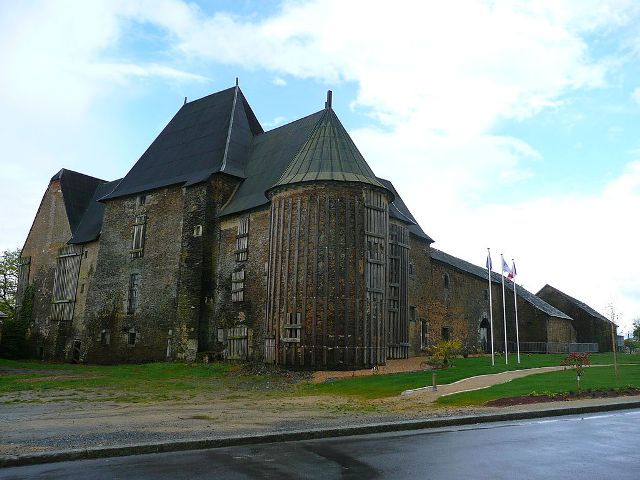 Location: Senonnes, in the Mayenne departement of France (Pays de la Loire Region).
Built: 20th century.
Condition: In good condition.
Ownership / Access: --.
ISMH Reference Number: --.
Notes: Château de Senonnes is located in Mayenne, in the village of Senonnes. With a lot of archeological plate, it was a historical monument by decree of 17 February 1988.The abbot Angot described in the early twentieth century the castle as an imposing dark mass, located in the village, which goes into ruin, although inhabited in part by the farmer. We only used the slate of the country that lends itself to any work of art. Two openings terracing, doors, windows and skylights, in the south-western corner of the court, have only some character. There was a wall with a tower, now isolated, was part. The castle is not as old as might be supposed, since the decoration has the crest of Adrienne Hall, probably widow then.The Lordship of Senonnes fell within Pouancé dependent 9 and # 78 oat trowels and 40 days of duty guard at the castle. In 1570, Jeanne Deffay, widow of François Le Poulchre was a creditor of the Jean BOISJOURDAN. Antoine du BOISJOURDAN, son of the former agreed to François Le Poulchre, probably son of the lady widow of Benestaie a duty of ECU 1153, and he performed on August 6 1592. Nevertheless John Marquis of Motre, heir the maid of Sevigne, itself heiress the Poulchre, claimed in 1623 the amount of the obligation to Francis of BOISJOURDAN, the subscriber son. But it produced the receipt.