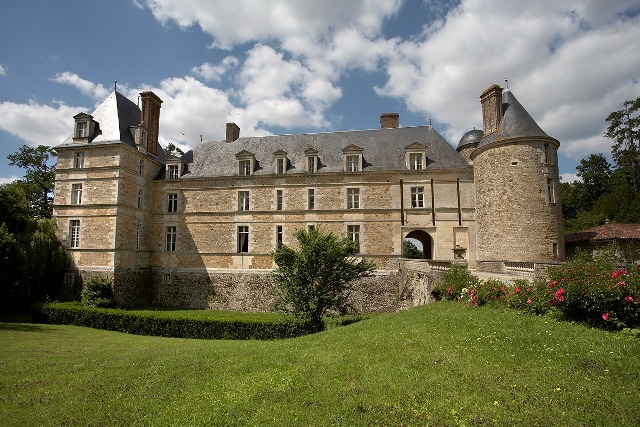 Location: Sainte-Hermine, in the Vendée departement of France (Pays de la Loire Region).
Built: 13th-17th century.
Condition: In good condition.
Ownership / Access: Privately owned.
ISMH Reference Number: PA00110240
Notes: Château de Sainte-Hermine, located in Sainte-Hermine, in Vendée, has survived the centuries, from the Middle Ages to the present. In 2004, the owners are discovering the "room which hosted the King Louis XIII." It is indeed, evolving into the chamber located above the entrance porch, a Louis XIII fireplace, hidden by a wall, he finds murals scraps (blue paint and lilies). In 2008, after intervention by the Regional Direction of Cultural Affairs, the walls were identified, assessed paintings and the remaining fragments clearly showed the layout of a room painted blue and fleurdelisé. On a wall also contains the regalia (crown, scepter and hand of justice, sword, etc.). This unique design has been registered, as the entire site, in the inventory of Historical Monuments.

How To Get To Château de Sainte-Hermine (Map):