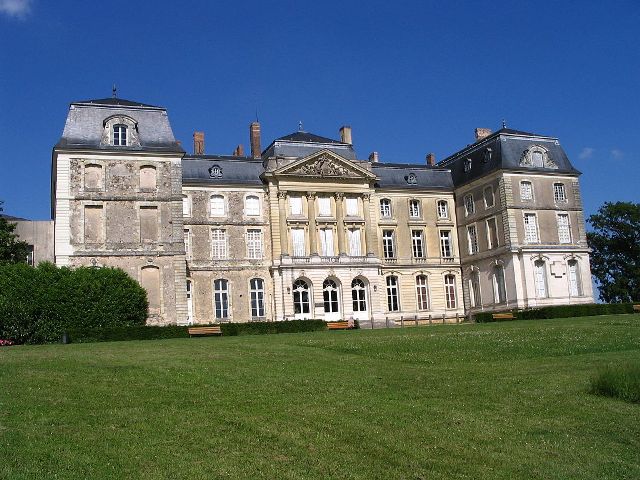 Location: Sablé-sur-Sarthe, in the Sarthe departement of France (Pays de la Loire Region).
Built: 15th-18th century.
Condition: In good condition.
Ownership / Access: State property.
ISMH Reference Number: PA00109924
Notes: Château de Sablé is a castle rebuilt in the eighteenth century built along the Sarthe, on the French town of Sable-sur-Sarthe, in the department of Sarthe. A castle which there are only remnants attested from the tenth century. The house that was rebuilt in the fifteenth or sixteenth century was also destroyed. The medieval part has a house in a square floor and an attic floor served by a spiral staircase and an exterior straight staircase, common, a tower with drawbridge, a so-called treasure tower, and a pregnant dated thirteenth or fourteenth century partially destroyed around 1773. the house has a square back in chapel rebuilt in the seventeenth century. The castle, built for the Marquis de Sable in the early eighteenth century, consists of a body of square house with two floors and attic floor with turrets topped with a bulb housing the latrines. The pediment was carved by Carrier Belleuse, elevations sculptures are due to the Vayer and those of the chapel to the Touvenin. Regular garden with pool built at the beginning of the eighteenth century was partially destroyed in the late nineteenth century and converted into a landscaped garden with a wrought iron gate. The ornamental garden and park Castle Sable, enrolled in pre-inventory of remarkable gardens, have been classified historical monuments on 18 October 1983.