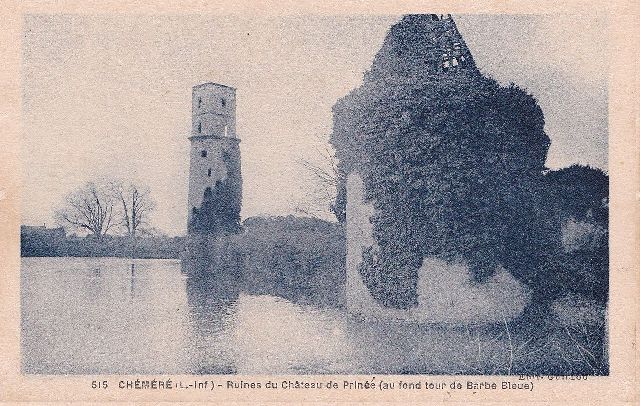 Location: Chaumes-en-Retz, in the Loire-Atlantique departement of France (Pays de la Loire Region).
Built: 13th century.
Condition: Ruins.
Ownership / Access: Private property.
Notes: Château de Princé is a castle located in Chaumes-en-Retz (delegated common Chéméré), View of road of which only a few ruins. It refers by extension various castles that have succeeded Princé. Many castles were built in the territory of the Forest Princé. The oldest is the castle surrounded by a moat city in 1382: Jeanne Chabot, lady Retz, nicknamed Joanna the Mad, lived there. In 1400, she gave the lordship of Princé to his grand-son, Guy de Laval. Gilles de Rais (Laval), born about 1405, is most famous as it was commissioned by Gilles Tremouille accompany Joan of Arc to fight the English. It gave its name to a tower of the castle Princé five-story "tower Bluebeard", whose ruins have disappeared in the early twentieth century; a small corner tower, called "chapel" is still visible on the ground. In 1641, the field is reduced from 1 000 logs (the newspaper was a surface unit of measurement representing the area plowed in a day.) To meet the expenses of the owners. Henri de Gondi died August 12, 1659 at Castle Princé, where he had retired from the resignation of his title of Duke of Retz in favor of his son and cousin Pierre in 1634. In 1774, the estate was sold in two lots: the castle (Princé old), ponds and the Northwest part; flag, land and timber in the East. In 1778 Princé old was bought by Jean Guillon, equerry and secretary of the king, who built a modern castle and a quadrangular lookout on the Tour. In the seventeenth century, at the initiative of Henri de Gondi, a Renaissance pavilion had been built close by, in connection with the garden layout enchanted Islands. The legend of the 1678 plan, very detailed, explicit mention two monuments, the "Castle of Prinçay" and "Château nine." His name is also focused on the Cassini map. It would have burned in 1793 and was partially rebuilt before being finally abandoned. Comparable movements of castles in history were observed in this geographical area and well-dated, for example in defense of Acheneau and Held "Nine Princé 'identifiable on the cadastre, means a country house, probably built in the nineteenth century.